GIS Stack Exchange is Open to All

GIS Stack Exchange is Open to All - New!
A place where you can post a question and get fast answers.
Wiki cross Digg approach. Using Tags and forum based content.
Any 'geo' question


What kind of questions can I ask here?

GIS - Stack Exchange is for programmers, DBAs, Cartographers, Geographers and anyone interested in GIS professionally.
Please do look around to see if your question has already been asked (and maybe even answered!) before you ask.

What kind of questions should I not ask here?

Avoid asking questions that are subjective, argumentative, or require extended discussion. This is not a discussion board, this is a place for questions that can be answered!
If you want to talk about the site itself, please don't do it here. Visit the meta-discussion site where you can talk about things like what questions are appropriate, what tags we should use, suggest a feature, or generally discuss how GIS - Stack Exchange  works.

Treat others with the same respect you'd want them to treat you. We're all here to learn together. Be tolerant of others who may not know everything you know. Bring your sense of humor.

UK SoundMap starts with a pilot survey based on the Sheffield metropolitan area. The national survey will follow later in 2010. 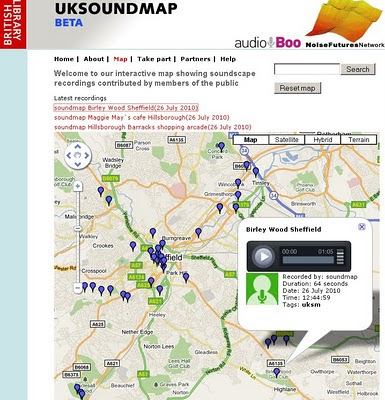 Make sure Location Services in Settings/General is switched on. Otherwise you can edit your recording on Audioboo FM and add a location by placing the microphone icon on the map at the place where you made the recording

How can I take part?

If you can make recordings in any location within the Sheffield area, please record your surroundings, describe them with tags and comments, then upload the recordings to our map. From there, a permanent public record of everyday sounds - the UK SoundMap - will be made accessible to everyone, while being stored at the British Library and made available to soundscape experts.

Want to add your sounds to the map then follow these steps;

Ways to record and publish

There are two ways. The easiest way is to use a smartphone. Alternatively you can use a web browser.

Once uploaded, your recordings will be found easily as locations on the soundmap and searchable by tags. Please allow 48 hours for your recordings to appear on UKSoundMap. You can meanwhile check your recordings right away on AudioBoo.fm
Map
http://sounds.bl.uk/uksoundmap/map.aspx

ESRI Shapefile - HTML5 Viewer
This is a neat way to display ESRI Shapefiles online without using any GIS software.
(Note: Not compatible with Internet Explorer) 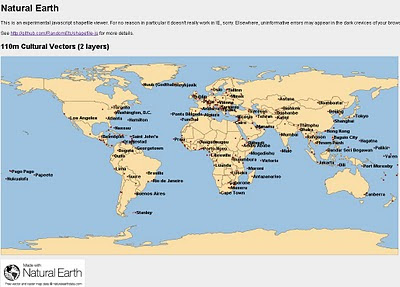 Two shapefiles are displayed here cities of the world and associated text along with Countries of the World with a line style and  polygon fill style.
Notes: Keep shapefiles as small as possible, smaller shapefiles returns faster display results.
Faster than ArcIMS in some cases. But depends on the hosting server. 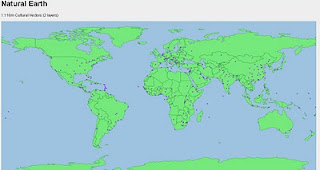 Mapperz Version, styles and fills changed, though seems slower, compare the difference.
The two files required are the .shp (geometry in lat/lng WGS84) and the .dbf (Table)
http://mapperz.110mb.com/shape/simple.html 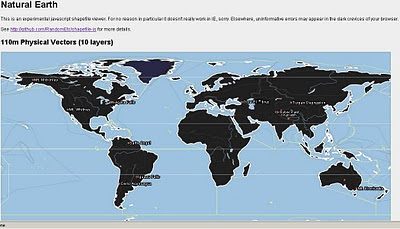 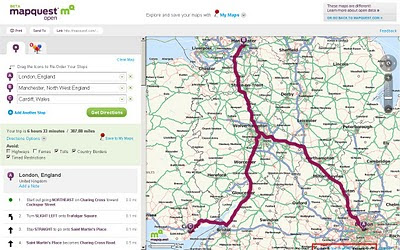 MapQuest have over the past few months vastly improved the map user interface and are one of the first major mapping service to engage and encourage the use of Open Street Map Data with the new MapQuest Open mapping project.


"At the 4th annual international State of the Map 2010 conference, their plan to be the first major mapping site to embrace and encourage open source mapping at scale.  As part of this initiative, MapQuest just launched their first site that is completely powered by open source data from OpenStreetMap.org"


"This new project – open.mapquest.co.uk – was developed using the new MapQuest.com design but using data provided by the OpenStreetMap community.  The main difference between this new site and our existing MapQuest UK site is that the mapping and routing data was created, edited and enhanced by every day people like you.  OpenStreetMap was designed to give the local community the ability to update areas (roads, parks, hiking trails, bike paths, points of interest, etc) that they know in their own neighborhood and around the world, ultimately leading to what we believe will be the best and most accurate mapping experience for all.


AOL (owners of Mapquest) also announced a $1 million open-source mapping investment fund.  This fund will support the growth of open-source mapping in the United States in the local communities that Patch.com covers.  More information about the AOL grant application process is available by emailing osm@mapquest.com."

More information - http://blog.mapquest.com/2010/07/09/mapquest-opens-up/
Well done to Mapquest for taking the challenge on and implementing a clean and easy to use mapping service.

Please give your feedback here http://mapquest.open-street-map.sgizmo.com/s3/

StepMap - Create Free Personal World Maps
"StepMap is a free service, enabling you to create, edit and share individual and personalized maps. Also, it allows you to export your maps to any other web site. The term "map" includes all kinds of topics, themes and design option. StepMap offers you a free tool to create maps that represent your specific, personal requirements and design ideas." 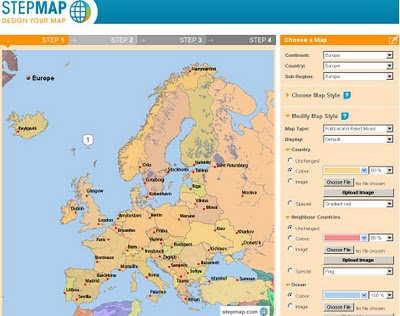 Create and customise your own world, regional or country map with this service. 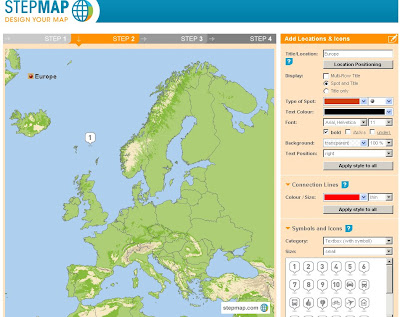 The free of charge features that are listed for private users also apply for any educational purpose, e.g. schools, universities or research.

That means that teachers and students can use StepMap for free considering the general terms ad conditions. 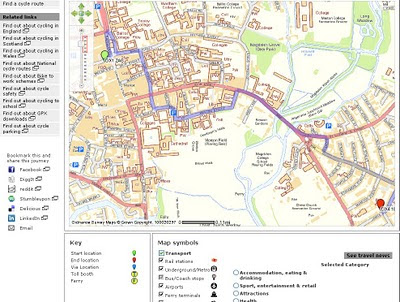 Cycle routes are now included - though limited to 50km in directions/route and is limited to cities around the UK. 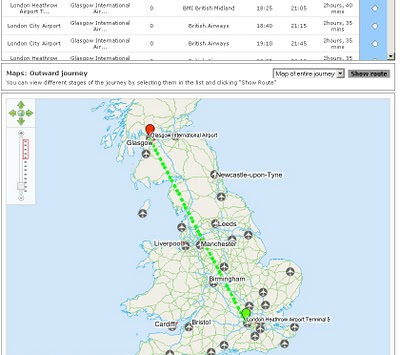 Find Flights from UK Cities with the best fares. 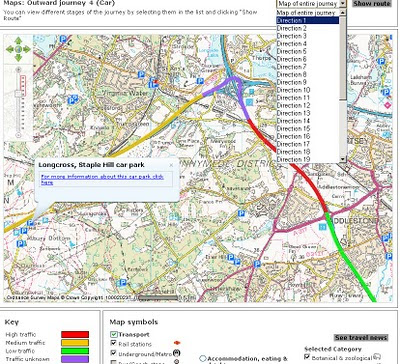 The routes are displayed on Ordnance Survey raster tiles with data supplied by transport direct.
Additional interactive point of interest (parking, bus stations etc) are also applied to the map.

The Google Earth KML shows how the world would be affected by a global average temperature increase of 4 Degrees Celsius is an awareness in climate science.

Using Google Earth this illustrates rising levels of sea water and reduction in crop yields in different parts of the globe if temperatures are not stemmed by reducing greenhouse gases.

The launch of the map by the Foreign Office (FCO) and the Department of Energy and Climate Change (Decc) comes in the wake of the "climategate" row over emails stolen from the University of East Anglia's Climatic Research Unit and the sustained attack it prompted on scientific research into man-made global warming.

On 14th July, the FCO and DECC launched an interactive map showing some of the possible impacts of a global temperature rise of 4 degrees Celsius above pre-industrial times. It underlines why the UK Government and other countries believe we must keep global warming to 2 degrees Celsius. The map includes videos from the contributing scientists, led by the Met Office Hadley Centre, talking about their research. It also includes examples of what the FCO and British Council are doing to build understanding globally of the urgent need for all countries to accelerate the transition to a low carbon economy.

Government chief scientist Professor John Beddington said there was "no doubt there is a problem in public confidence in climate change".

Between November last year and February this year, the number of people who thought climate change was not happening had increased and the number who thought it was man-made had fallen.

The map, which will be updated as new data becomes available, features videos of scientists talking about the research behind the potential impacts of climate change and information about work undertaken by the Foreign Office and British Council.

Climate change minister Greg Barker said politicians had a responsibility to help make it easy for people to take action on climate changes.

And he said: "A lot of this is about the tone - there was a slight sense the climate community, and politicians are a large part of that, got what was coming to it.

"It was being a little too preachy, had a little bit of a high moral tone."

He said people did not need to deal in absolutes to make a strong case for action on climate change and it was in the UK's long-term interest to lead the way on the move to a low carbon economy.

Ed Parsons from Google said: "This is a great example of the benefits of using the latest web technology to visualise scientific information and promote better understanding of the potential impacts of climate change."

The online map is available, for people who have Google Earth installed, at: http://www.fco.gov.uk/google-earth-4degrees.kml

more details on the implementation from this blog
http://jimlynn.wordpress.com/2009/11/12/ordnance-survey-maps-in-bing-maps-silverlight-control/ 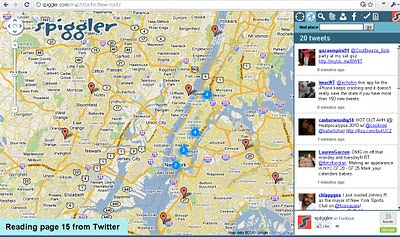 Updates as you pan the v3 Google map nice integration with the twitter api.
http://spiggler.com/
Streetview Inside 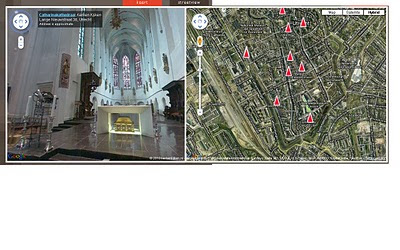 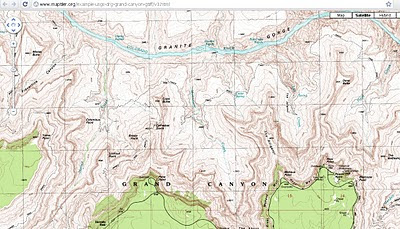 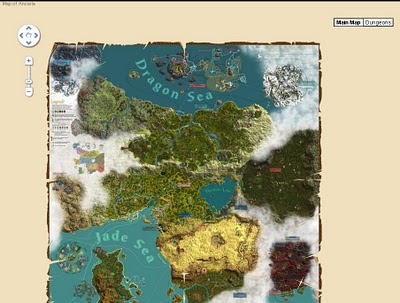 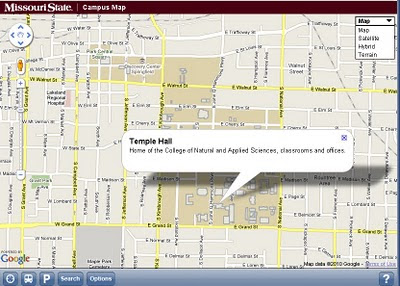 Clean, Fast with campus overlay implemented in v3 for mobile users.
http://search.missouristate.edu/map/mobile/
Don't forget that you can style your own map in v3 see the previous post.
http://mapperz.blogspot.com/2010/05/google-maps-api-styled-map-wizard.html
Have you made your own v3 custom map like this? Add a comment and mapperz will post an update.

"A collection of Tour de France Maps for 2010"
The Cycling event starts on 3rd July 2010 and you view some impressive mapping applications. Some will be 'live' during the event.

The 97th annual Tour de France begins on July 3rd in Rotterdam (Prologue Stage), Netherlands and will span 23 riding days en route to the finish on July 25th in Paris, France. Along the 20 Stages coveraging 3,642 km route in total 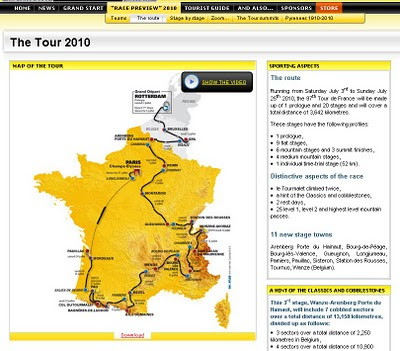 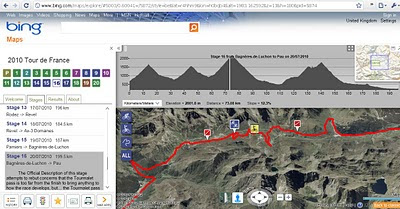 Bing Maps includes elevation gain, slope (-/+%) with an interactive profile chart linked to the map route of each stage.
The 2010 Tour de France map app:
This app is designed to help you visualise the overall race, the stages (stages tab + numbers) and how variables such as weather & elevation (elevation profiles) will impact each stage. Results will be updated along the way in the 'Results' tab.
Check the content in the 'Stages' and 'Results' tabs as you keep track of the greatest cycling race in the world.
http://www.bing.com/maps/explore/#5003/0.60041=/5872/style=be&lat=r4hhm9&lon=h0bqb4&alt=1983.162592&z=13&h=180&pid=5874

Live Tracker of The Tour de France 2010 by Ubilabs 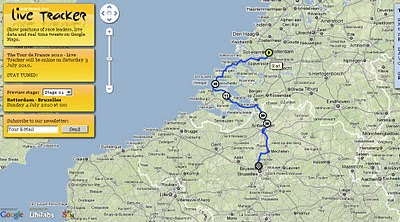 This mapping site is consistent every year in providing live racing information on the race.
This year comes with twitter integration and facts and stats (when live racing is on).
http://www.ubilabs.net/tourdefrance/ Cycling News has produce a quick and easy map to all the stages using Google Maps API.
http://www.cyclingnews.com/races/97th-tour-de-france-gt/race-maps