According to the Guardian:

"Wikileaks is hosting what it says is a copy of the entire UK postcode list, last updated on July 8 2009, that contains "all 1,841,177 UK post codes together with lattitude [sic] and longitude, grid references, county, district, ward, NHS codes and regions, Ordnance Survey reference, and date of introduction. The database ... is over 100,000 pages in size."

The 230MB file, zipped to 20MB, does indeed contain a huge slew of postcodes in comma-separated form, with those details as headers for each column.

Oh my. We have no idea who has leaked this, but it is the gateway to some valuable information: Royal Mail, as we ascertained previously in the Free Our Data campaign, sells the Postcode Address File (aka PAF) for a considerable sum, and makes a good profit on it: in August 2007 the postal regulator Postcomm revealed that PAF operations made a profit of £1.58m on revenues of £18.36m, all but £4m from resellers."

Data seems to be

so there is a licence cost:

If you want a non-derived Royal Mail/Ordnance Survey and Free Postcodes without an annual licence.

De-cluttering Points of Interest [POI] with the static maps api 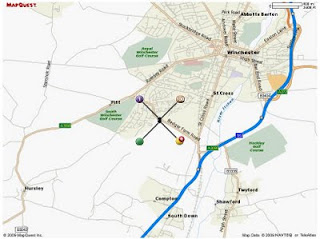 This static map is create with the url request

*copying and pasting the long url will work - though for geocoding and other controlled functions require an api key.
API keys are free - they can be created by signing up to Mapquest API via
http://developer.mapquest.com/

**for France only but is hoping to expand in the near future.

This makes it very useful to print and use on your travels or to help OpenStreetMap fill in any missing or changed names - you can contribute here with over 135,000 budding OSM'ers.
Note: you don't have to have a GPS device to contribute.
Paper and Pencil works! (see http://walking-papers.org/)

This web service has been called MapOSMatic, like map-o-matic but with a reference to OpenStreetMap (OSM). The web service is written in Python using Django. It is responsible for storing the rendering requests and displaying the result of these requests. The rendering itself takes place asynchronously through the maposmaticd daemon. This daemon does only one rendering at a time, which is very important because of the CPU and I/O intensive nature of the map rendering process.

If you would like to contribute to this project then more information is available:
http://www.maposmatic.org/about/

Mapperz looks forward to it expanding across the rest Europe and the rest of the World.

WMS [Web Mapping Service] is not new - in GIS and Technology terms is old.
But there are plenty of services, organisations, governments out there that do serve their content via this format.

So why this post - Well there was a Google Maps API Thread that was becoming very interesting:
"mentionned last week that canadian topo maps (NRCAN) are of poor quality. This is true. But a new service have been implemented in may by NRCAN to replace it. It seems this introduction passed unnoticed so far. I myself searched for a long time and to find information about this new service. NRCAN has introduced in may the Toporama WMS service. This gives access to the new CANTOPO, the new generation of Topographic Maps (1 :50,000) produced by NRCAN. Theses maps are in vector format. The availability of this new vector format for canadian topo maps gives us more precision and clarity as compared to the old Raster Maps format who where a scan of the Paper Maps. Texts describing rivers and local points of interest do not anymore collapse when zooming to lower levels. The map is also of higher quality at higher zoom level. And
the information shown on the maps is adapted to the zoom levels. "
PierreB

Then the talented google map api programmer PapaBear picked up on this and quickly developed this: 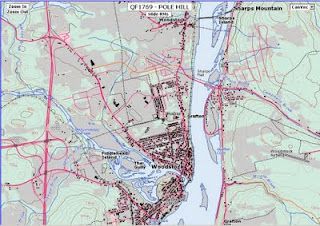 the new generation of Topographic Maps from CANTOPO
The quality and content from this dataset is rich in detail, contours, very small lakes, buildings, rail road etc

Though the full credit goes to PapaBear for the example and PierreB for thier knowledge and skills to put this together in a very short space of time.

"This map is of a station (survey marker) very near the border in
Maine. It should open with USGS topo map type. These topos usually
overlap the border and show a short distance into Canada (usually to
the next 7.5 or 15 minutes of longitide, depending on the scale).

The map type is changed with the selector in the upper right. I have
kept the old raster version from NR canada (type "CanRas") as well as
the new vector maps (type "CanVec").

You can compare the USGS topos and the 2 Canadian types for the same
locale. The USGS map tiles are also raster data (and these have been
know to have missing areas and occasional mis-registration) but they
are higher resolution scans than the old NR Canada tiles..

The topography is not too interesting, since it's a swampy area, but
nevertheless the different map type are all visible. "

If you want to see a working example then go to:
http://members.bellatlantic.net/~vze2h6gy/papabear/BM_Station_GMap.html#FILE=Maine_Peaks.js&index=QF1769&title=1&width=960&height=720&showrm=1

{note: this is a testing environment and change be moved or changed without notice}

But hopefully users will be impressed with the resources and hopefully make use of the wms services still out there.

Mapping Wise what can you do with it? 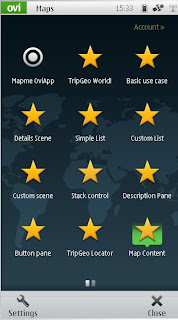 Well the first version had an issue - apps would not show, but this has been rectified and now the examples will show in the Nokia(N97) Emulator. 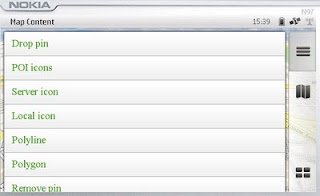 Landscape mode enabled - shows all example with out needing to scroll.

Custom Polygon generated in Ovi Map Player using the Ovi Apps SDK
(mapperz customised the orginal example with something slightly better)
So how was this achieved?

The code was found in mapfunctions.js
(in the Downloaded SDK >com.nokia.maps.examples.mapContent)
in here there is a section of code:

all that code for one square polygon? well yes...

**note make sure you use {} 'curly brackets' and not () 'normal brackets' or you will get javascript errors.

There is currently no option for holes in polygons (donut polygons)
What would really help is the ability to overlay KML/GPX files from servers or accessed from the device.

Not sure why zoom extent coordinates are required - would be easier for the extent of the polygon(s) to be used.


Was hoping to evaulate the New Ovi Maps Navigiation API though in reading the documentation you get a message:

NOTE: The functionality described here is not yet available.

Would prefer they left it out until it was available - would presume that this requires an api key of sorts - but if wanted it tested and de-bugged in beta you would think it would be.


There is demand for this - many, many mobile devices are geo-aware and can use this but it seems clearer there is going to be a good few months of re-writting code to make this a truely customisatable portable mapping and navigational system.
Mapperz will review when activated.

Nokia have the resources they just need to apply it a little stronger.
Web Documentation would be also helpful - like many other mapping apis available.

is no currently and unfortunately (hope this changes)

Ovi Maps Player API stongest competitor is going to be Google Map API (v3) There are some interesting features coming to it in the coming weeks, stay tuned.

When these teething issues have been ironed out then they will have a competitive product.
There is no indication whether the Navigation API will require a licence.
Currently Nokia Ovi Map users require a daily,weekly,monthly or yearly licence to use Navigational Features, if you make an app with it - does everyone require a seperate licence.
If they do it will be a stumbling block for a promising feature.

ViaMichelin has had traffic information available across most of Europe for several months now.
Their Blog seems a little dated. So here is a little update.

Speed camera data is now available as an additional overlay - this data can be useful when overlaying the traffic data. The data for speed cameras is fairly up-to-date (apart from Swindon)
note: mobile 'safety' cameras are not mapped.

MP3 Player for AudioTours (see below)

The 'prettiest' form of Open Street Map has a nice clean update: 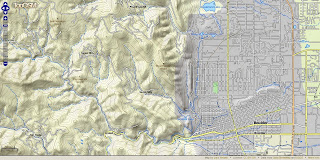 TopOSM Changes:
Techie talk:
"I created a Python script to generate map legend HTML snippets - complete with images - from mapnik description files and a short description file that specify what features to include. You can see the result at http://toposm.com/ma clicking on the "Show/Hide Legend" at the bottom right. Legends are specific to the current zoom level, so they will refresh when zooming in and out."

"I also added elevation labels for contour lines. The only issue is that the data from MassGIS (where the contours come from) is in meters (3 meter interval) and my map is entirely in ft, so the values look a bit funky sometimes. Not much I can do about that, though..."
Lars Ahlzen

Lots of minor other improvements too. There's a full change log at:
http://toposm.com/changelog.html

As always, the map is at http://toposm.com/

Full Credit to Lars Ahlzen in this excellent version of Open Street Map
he notes:
"It took longer than I thought, but I've finally released TopOSM (my OSM-based topographic map project) for the state of Colorado."

Of Mapping interest there are:

Developers that register for the programme will have access to the following:

"Introducing Maps Player - the brand-new, easy-to-use API for Ovi Maps. Maps Player makes it simple to integrate rich Ovi Maps functionality into your website, turning it into a personalised, contextual and compelling experience. "

here is one example 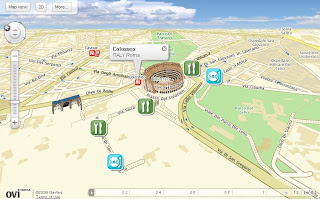 Note: you cannot copy & paste the source code unless you have signed up to Ovi Maps Player API (beta) and have recieved 2 api keys from Nokia for specific domains

** For 3D view an Ovi Map Plugin is required and you will require a restart of you web browser.

Ovi Navigation API
Ovi Maps Navigation Player API gives you access to the industry-leading Ovi Maps Walk and Drive navigation service, powered by NAVTEQ [Nokia Owned]. With just a few lines of JavaScript, you can add turn-by-turn pedestrian or car navigation to your Ovi apps. You can also add routing to your websites. 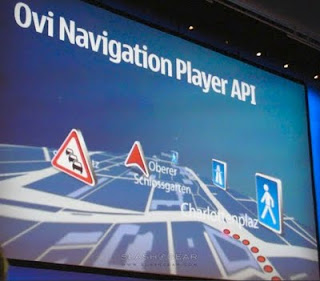 Advanced vector maps allow routes matched to the needs of drivers and pedestrians – even when your users are offline.

Developers will be able to use simple, high-level interfaces to leverage turn-by-turn Walk and Drive navigation, with voice guidance in over 20 languages

Users are tired of seeing car routes recycled as "pedestrian". Give them a real Walk experience, with custom map display and enhanced DiscoverCities Navteq data. 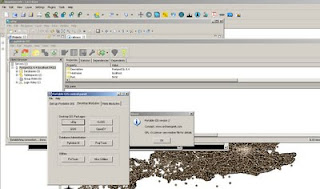 If you want a fully featured GIS suite that works portably from a USB stick in Windows, that can be rapidly deployed and used anywhere in the world, and comes with full setup and support, then this is for you. 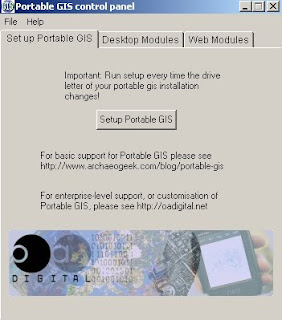 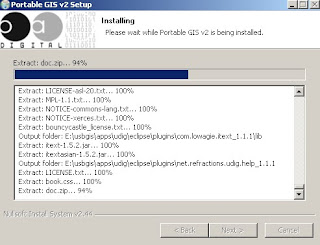 Easy installing - and your be up and running in minutes.


What goes on the USB Stick (2GB stick required) 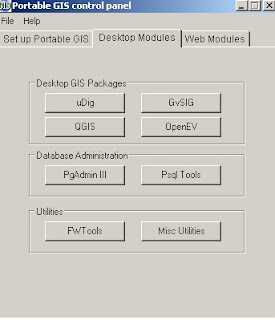 Control Panel give users fast access to Setting Up, Desktop and Web Modules

Full Credit to archaeogeek who has made this make GIS much more portable and easier to use for all levels of GIS knowledge. Well done and many thanks.