Cartographic mis-representation?
update [20/09/2011] from HaperCollins Publishers at the bottom

Most maps lie, they are only a representation of what is out in the real world, simplified, distorted and can be mis-leading. 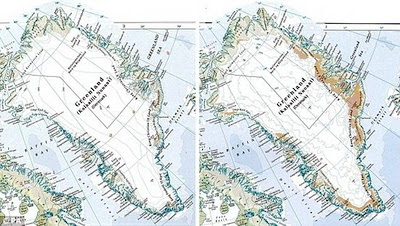 The Map of Greenland by the Times Atlas is a cause of concern left is the 12 year old representation of Greenland, the right is the revised current 2011 representation - side by side can be very clear they are representing less ice than before by a huge margin.

Image against a recent satellite imagery - the out-skirting coastline and more noticeable is the difference in colour representation. (There is also seasonal change that is difficult to represent in one snapshot of the cartographic map.)
Though a lighter (grey) would of be wiser to graduate the contrast.

"Publicity for the latest edition of the atlas, launched last week, said warming had turned 15% of Greenland's former ice-covered land "green and ice-free".


But scientists from the Scott Polar Research Institute say the figures are wrong; the ice has not shrunk so much.

"Recent satellite images of Greenland make it clear that there are in fact still numerous glaciers and permanent ice cover where the new Times Atlas shows ice-free conditions and the emergence of new lands. Furthermore, the low-lying fringe of the main ice sheet appears to be shown as land, not ice.

A sizable portion of the area mapped as ice-free in the Atlas is clearly still ice-covered. We do not know why this error has occurred, but it is regrettable that the claimed drastic reduction in the extent of ice in Greenland has created headline news around the world. There is to our knowledge no support for this claim in the published scientific literature."

"Greenland Ice Sheet is approximately 2.9 million cubic kilometers and the current rate whereby ice is lost is roughly 200 cubic kilometers per year. This is on the order of 0.1% by volume over 12 years. Numerous glaciers have retreated over the last decade, capturing the attention of scientists, policymakers and the general public. Because of this retreat, many glaciers are now flowing faster and terrain previously ice-covered is emerging along the coast"
Ernst (Ejo) Schrama
http://ejo-twitter.blogspot.com/2011/09/sure-greenland-getting-greener-but-who.html

"we issued a press release which unfortunately has been misleading with regard to the Greenland statistics. We came to these statistics by comparing the extent of the ice cap between the 10th and 13th editions (1999 vs 2011) of the atlas. The conclusion that was drawn from this, that 15% of Greenland’s once permanent ice cover has had to be erased, was highlighted in the press release not in the Atlas itself. "

The GIS Stack Exchange Community now has a GIS Blog for interesting topics and expansion of questions and events from http://gis.stackexchange.com/questions

If you are interested in GIS, Cartography,Web Mapping, Databases you can also join in and expand the knowledge sharing that answers questions quickly.


New content will be coming soon from community members from the GIS Stack Exchange.


Popular & reoccurring topics on GIS.SE, events related to GIS and the GIS.SE community with a random collection of posts by different authors will give a good wide cross-section of articles. 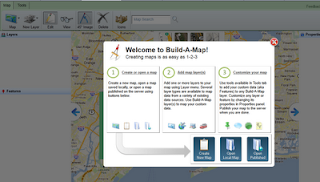 Build-A-Map lets you build interactive online maps with minimal effort. With simple point-and-click user interface you are able to create visually appealing, functionally rich, and interactive maps. When you are done building, publish your map to build-a-map servers and then simply use it in your website or application.

Map your own data, but also use provided third-party datasources such as Google Places, SimpleGeo Places, Panoramio, and others to enhance your map.

Wide range of map building tools are available out of the box and ready for use.

build-a-map have invested a lot of time in building an extensible platform that allows rapid development of map building tools.

what a great idea - a mobile site where you can put your street,bus stop id, postcode and find out when the next bus is coming!

Well it is here - Transport for London (TfL) have created this site.

You can filter the routes or store as 'My Stops' for future reference.