Quikmaps back up and running

Using sophisticated mapping techniques and using the excellent quikmaps website.
The creation of a 'Treasure Map' was easily achieved.

X does mark the spot... just this once.

A World Map that presents a whole new way of getting connected with the world. 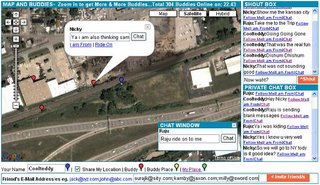 GlobeFeed maps is built on Google Map APIs and contains world photos, wikipedia entries for locations, integrated Geoplace names, chat, nearby postcodes, bookmarking and sharing locations on a World Map. There is lot more on this map and its free to use.

How much does it cost to display an Ordnance Survey (OS) map on a website? contd.

How much is that map on your website? well for a charity this would be...

Using multiple scales will, of course, ramp up costs very quickly - as will being popular. But even licensing seven scales will only take your annual costs to around £100,000* ($181,980)- not into the millions.

If Ordnance Survey reduced costs and therefore gained customers numbers, surely they would recover the costs of surveying and updating their digital datasets? 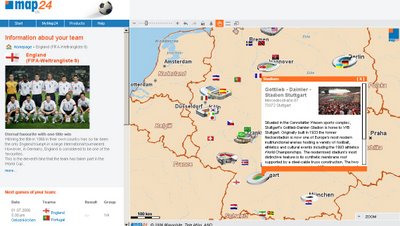 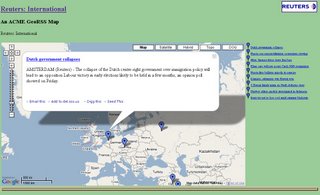 Using Reuters news as it's source. 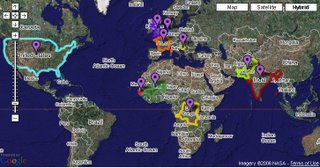 responsive map with auto centring on the news story. 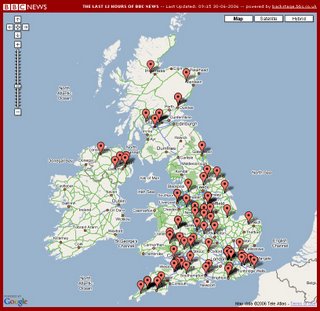 News Maps for the United Kingdom. Powered by BBC Backstage, reports the last 12 hours of news.

Clean and easy to use.
credit to Ben O'Neill 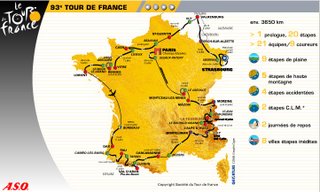 A Static and Flash Version of the Tour de France
Live route information is also available. 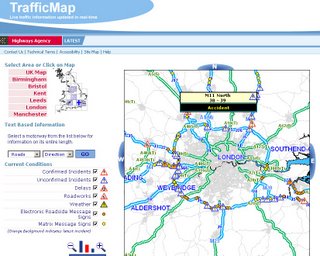 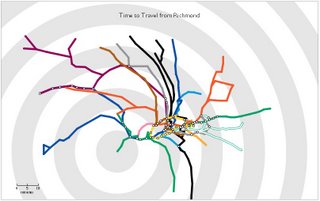 "Click on a station to see the London Underground map reorganise around the times of travel from that station. Shortest paths are used to place the other stations - radius is proportional to time to travel, and angle should be correct for as-the-crow-flies direction on a map. The concentric circles are at 10 minute intervals.
Press 'g' to get back to the geographical tube map."

Find Endangered species and find their locations using the WildFinder 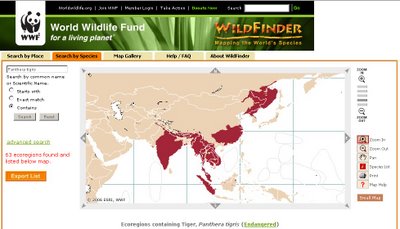 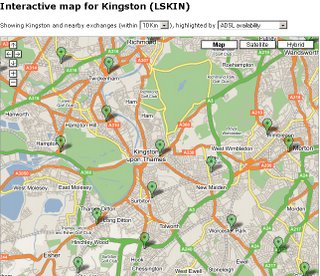 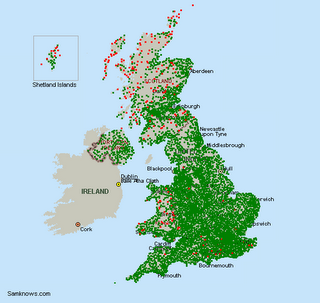 Underlying all Internet maps and mapping websites is the BT Broadband network.
Sam Knows is an excellent resource and visualises Broadband providers with Static and Google Maps for the user. 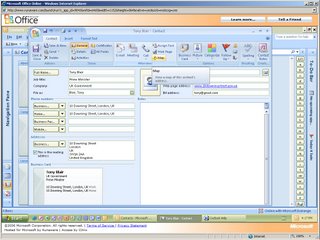 Testing Microsoft Office 2007 Online with Contacts in Outlook 2007 there is 'View a Map of this Contact' function.


Hopefully when its released a Map like this will work. 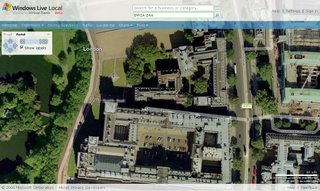 Google Maps on Mobiles Phones (GPRS/WAP phones) have been around for a while though its seems that improvements to the speed and more mobile devices has been supported.


The link for your mobile device is www.google.co.uk/gmm

Maps on your Ipod Photo

Maps of Underground routes and stations on your Ipod to view when out and about. 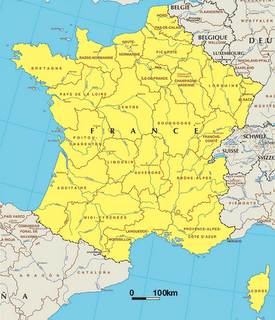 A True European map and presents each country's name and place names in the local language.

The maps show the administrative divisions of each country as determined by the national authorities.

Clickable but not Dragable 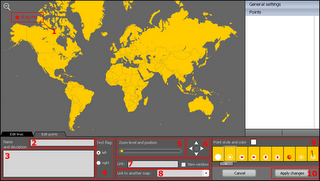 Create clean simple maps with ammaps... uses flash but can export to .html

Make a map in minutes if not seconds...

Clean, easy to use google map creator for anyone to use.

Update: 28/06/2006 - Due to being very popular QuikMaps has had to move, all links have been updated from this blog. 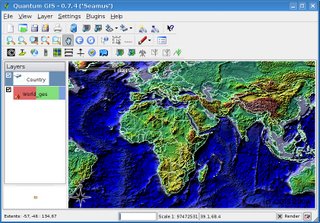 So you want to make a Google Map?

Mike Williams Google Map Tutorial is one of the best starting points for creating Google Maps of your own. Clear, Clean and Easy Documentaion in Plain English.
Example Number One

Keep the good work up Mike. 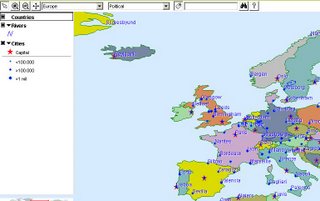 ALOV Map is free a portable Java Application for publishing vector and raster maps to the Internet. 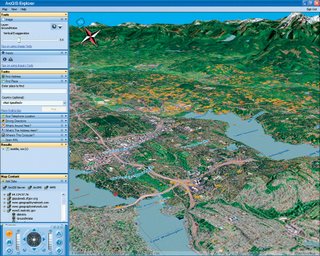 ArcGIS Explorer is soon to be released and it seems that will be able to do more than Google Earth in features but can it spread further than just the GIS community?


Both look great products (Viewers are both Free) but can paided services really beat Free data too?


Google provide both the viewer and the data via a desktop application.
Esri provide the viewer free but what about the data?
Can it display Arc/Info Coverages, Shapefiles and Geodatabase datasets?

We will see - watch this space for answers.... 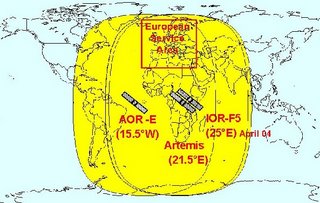 GALILEO offers a number of advantages over GPS.
Advantages are:

American version of what this blog is doing, useful links and interesting articles.
blog on. 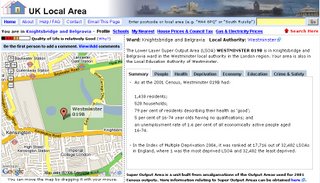 Very informative Map that finds information on your local area. 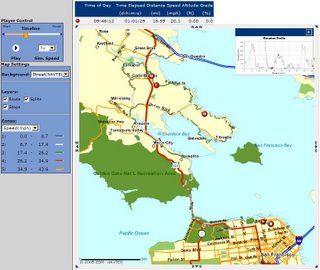 Works in IE6+ but not FireFox because of limitations with the Adobe SVG viewer. 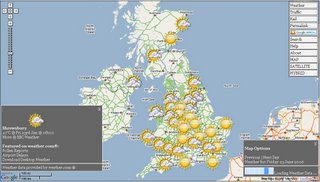 Clean, Fast and Clear UK Map from Blue Ghost BBC Backstage. This site pulls live feeds of Weather and Traffic information and displays it fast on the Google Map.

Solution: Ordnance Survey to drop the cost of it's maps (all maps digital, paper etc) this would allow more customers to be able to afford them (more customers, more profit)- raising profits once more.

You can now view KML in Google Maps by entering the URL for your KML or KMZ file. 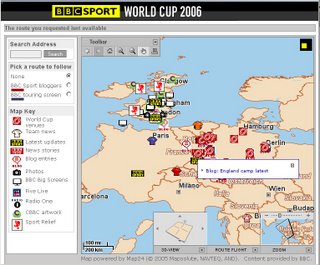 Urban Population of the World | Flash 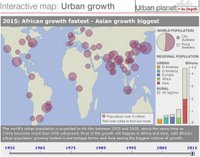 OpenJUMP – The free, Java based and open source Geographic Information System for the World

OpenJUMP – The free, Java based and open source Geographic Information System for the World

Geocoding has been the Number 1 requested feature on the Google Maps API, Google prove that they do listen and read users emails and blogs.

Google Geocoding is available for USA, Canada, Italy, France, Germany only so far.

Mike Williams Website shows you step by step how to use it with excellent documentation in a short space of time since it was released.

Google Maps for Enterprise (for IntraNet)

The test version of Picasa can Geo Tag images with location information that can be used with google earth.
Credits to Ogle Earth

Mapbender is a Open Source Map Application.
Using WMS from Demis World Map WMS as a source data. User data is stored in a PostGIS extension is used to render maps by using MapServer WMS. The GeoServer WFS-T provides for the GML which Mapbender uses for the interactive tool tips and digitizing modules.

Weather Bonk is a mashup that lets you view real time weather information on a map.
View temperatures, windspeed, and even live webcams to see what the weather is like in your favourite places.

Interested in learning more about kml for Google Earth but don't want to wade through a long, detailed document? Just want to jump right in and figure it out for yourself? Then this is for you.

A kml tutorial for Google Earth that allows you to jump right in and get started, showing real examples that can be viewed in Google Earth.

Maps from the National Library of Scotland

The map collection at The National Library of Scotland is one of the 10 largest in the world. They offer online maps of Edinburgh, Glasgow, and Wick, allowing a unique look at those cities from 150 years ago. The map of Wick is from 1872 and displays features within some buildings, while the map of Edinburgh was originally published in 1891. 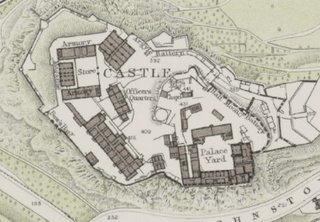 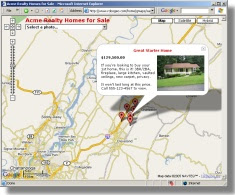 RoboGeo allows you to geocode your photos with location information
from a GPS tracklog, an imported GPX file, from GPS waypoints,
or manually entered coordinates.

You can then document the photo on a webpage
that uses Google Maps, in Google Earth, or on Flickr.

Hurricane Season in the Caribbean starts so does New Google Maps from IBISEYE providing interesting reading on current alerts including tornados, hurricane and tropical storms. This site also provides historical data back to 1851.

The Gough Map of Great Britain

A new website that allows searching for books,guides and maps for anywhere in the world, a good index and choice. Passport at the ready.

If you have travelled and always wanted to review it online.
Submit your own travel experiences, and get a Lonely Planet guide free of charge (if published online). 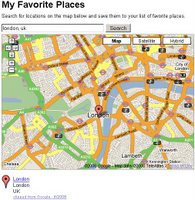 Don Crowleyshows how you can implement google maps with your calendar or shared calendar, reversing the way you can add locations in the calendar, very useful if planning a trip with others. 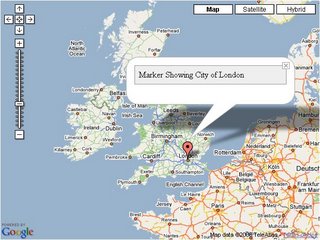 1. Navigate using the map controls to the place you want to add your marker.
2. Activate the controls.
3. Click on the map to place to add a marker.
4. Give your marker a name and add some content for it's popup.
5. Click the 'Add marker' button and your marker will appear on the map.
6. Repeat steps 1 - 5 to add as many markers as you need
7. Click the Generate code button.Copy the code to a page on your website and change the API key and the link to your marker graphics.
8. Get your own API key from Google

Making Maps Simple for Everyone.

1,100 miles to trek and 4 months to get to the North Pole and back. Their location is plotted Live with a red point, past locations with blue points.
To open in Google Earth click the logo

Microsoft® MapPoint® 2006
New Features include:
European Version is due for release Summer 2006. Prices ($ and €)

26 Free GIS Viewers, Select one that meets your requirments.
Some easier to use than others.

With only days to Go until the World Cup kicks off....
Orange Tea presents to you the twelve stadiums in 3D where the matches will be played for the FIFA Worldcup 2006 in Germany
Download the KML file for use in Google Earth

The maps presented on this website are cartograms, otherwise known as density-equalising maps.

Google| Talk Maps| Chat to Others

If you have a Google Talk account you can now point on Google Maps where you are. The Google Talk Map shows if you are available/busy and shows a custom message which can contain a link to your website, blog, or your hometown site, webcam etc.

How to use Google Talk Maps