See how much CO2 your flying puts in the air 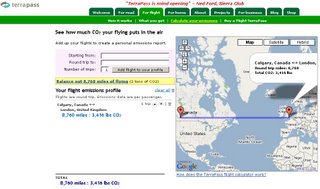 "By calculating the distance between your origin and destination city, based on their latitude and longitude. This is a standard trigonometric calculation. If you wish to calculate the effect of stopovers, simply enter the legs of the flight as separate trips.

Next you are categorised by flight as a short, medium, or long-haul trips. Because planes burn more fuel at takeoff and landing than at cruising altitude, short-haul trips are less fuel-efficient per mile flown.

For each of the three types of trips, a different carbon index that indicates the amount of fuel burned, on average, per mile of the journey. By multiplying this index by the distance of your trip, it is calculated how much fuel was burned per passenger for that particular flight."

Always know when and where your pictures were taken with the Sony GPS-CS1. Now you can keep track of your digital photos with satellite precision. 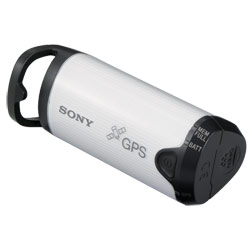 "Keep track of your photo locations and dates easily with satellite precision. The GPS-CS1 calculates and records position data. When used with the supplied GPS Image Tracker software, the GPS-CS1 allows you to match the time and location data in the device with your photos. And by using the Picture Motion Browser software, supplied with certain Sony cameras*, your photos will be shown on an online map, giving you a whole new way to organize, manage and enjoy your pictures"

Simple operation
No need for complex set-up or connection. Turn on the GPS unit and check its positioning status, match the data and enjoy the new photographic enjoyment.

Handy,Compact and lightweight, weighing only 55g (not including batteries).
Features:
Store data up to one month
Holds approximately 360 hours (31MB) of data, equivalent to one month of tracking recorded at 15 second intervals. Number of log entries may differ depending on satellite coverage and signal strength.
Low power consumption
Efficient design allows up to 10 hours of use with alkaline batteries, or 14 hours with Ni-MH batteries.
Records location every 15 seconds
The GPS Unit records a location log every 15 seconds. When a photo is taken between two log points, the supplied GPS Image Tracker software estimates the locations by extrapolating from logs recorded before and after (before or later) photos are taken. the software creates an estimated location between the two recorded locations. Also If the user takes a photo when there is no satellite signal available, such as when going underground or indoors, the software makes its estimation in the same way. based on the two nearest location logs.

GeoRSS Feeds now easy to use and display on a Google Map. 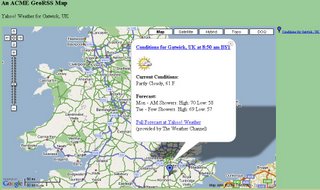 Example here was
http://www.acme.com/GeoRSS/about.html
'Try it' bar
added
http://xml.weather.yahoo.com/forecastrss?p=UKXX1899&u=f +Go
(you may need to zoom out)
Refresh if live traffic or weather data.

Suggest multiple GeoRSS inputs for comparing results
and set an overview or less zoomed in map after clicking go. 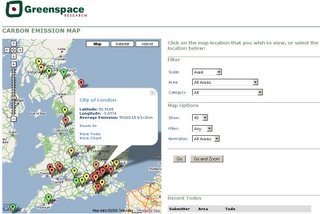 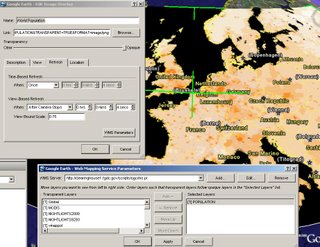 Add > Image Overlay>Refresh>WMS Parameters
Google Earth will check services are available (some will fail)
check the layer of interest and 'Add layers'
Wait - after stop any zooming or panning or scrolling.
waiting (a loading/progress would be useful here)

WMS images will load (be patient on slow internet connections)

When panning-zooming-scrolling after it is loaded, a transparent reload icon will appear indicating a new request to the WMS Server.

One of the New Features in Google Earth (Beta 4 Build 4.0.2080) -clicking update inside Google Earth does not update to this version.

The temporal aspect of data and time is now represented in a easy way to understand. 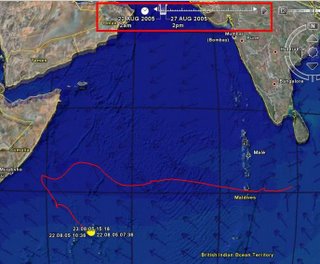 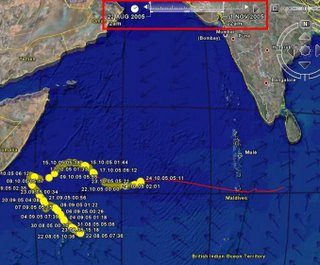 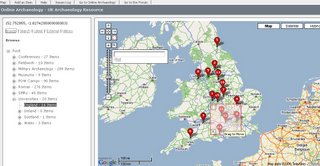 Windows explorer navigation on the left interacting with the map on the right.
Use the extra icons to refine search (uses yahoo geocoder).

"When you click Find, it grabs the L/L (Long/Lat) from Yahoo geocoder and then centers the map, and loads all of my records within the bounds of the new view - so it's actually by design that a lot of markers are loaded. I'm using it as a 'search by area' function. I might try to add a small circular polyline around the L/L point that Yahoo gives me so that people know where it is - like Multimap."

Microsoft have done some Major Updates to Windows Live Local 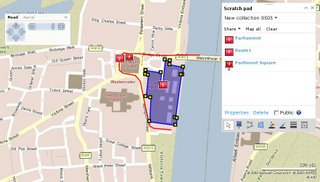 Digitizing is now a reality and your can re-edit Points, Lines and Polygons

"Draw on your maps. In the last release of Live Local we introduced the Collection feature, allowing you to draw a series of pushpins on the map, save them, and easily share them with others via a simple perma-link. With this release, we've extended Collections with the ability to add lines and closed shapes to your map. Along with the familiar pushpin tool on the Scratchpad, you'll now find a bunch of drawing tools like this:"

A very helpful and useful visual guide to trains and their location.

Choose your Location or Destination and see the trains arrive (on time?) 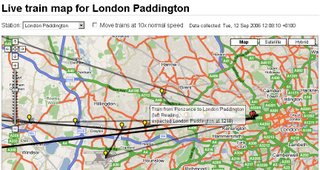 Simliar to the Dublin Live Trains Map +(zoom in)

Useful if can use this service on a Mobile Device.

A nice clean interactive map for tourists visiting the UK. 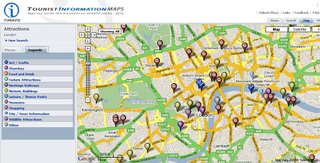 Drill-down to the area you are visiting.
London has lots of places of interests and is up-to-date.


More information is available by clicking on the relevant legend icon or on the map.

Google have updated satellite images and some enhancements on the map tiles for the UK (and possibly other Areas.) 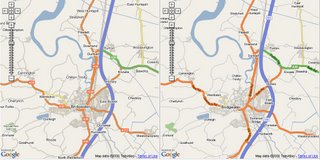 Thanks to Mike Williams you can put google map additions side by side and cross-reference them.
Try the TeleAtlas vs NavTeq some interesting differences....
and now more updates across the world

an update by CCA 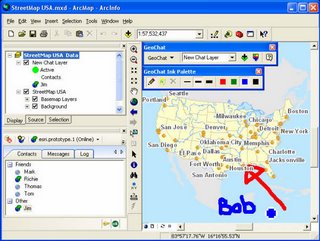 The ESRI Prototype Lab is proud to announce the second release of Geochat. Geochat can be downloaded from here on ESRI's ArcScripts website. This release of Geochat is compatiable with ArcGIS Desktop 9.1 and 9.2UC.
What's new with GeoChat 2 for users?
1) New user interface (see screenshots),
2) Office-sttle alerts when new geochat messages arrive,
3) Support for adding/removing/grouping jabber users, 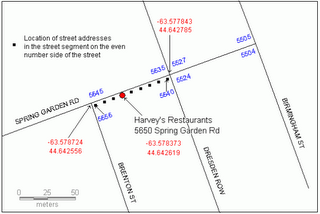 A World Map that show Day-time and Dusk-time and Night-time. 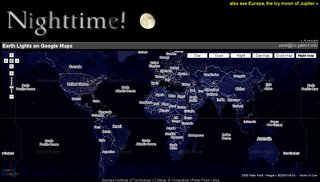 For Local Times use Earthtools

Catch the Pigeon (with Pollution Mapping) 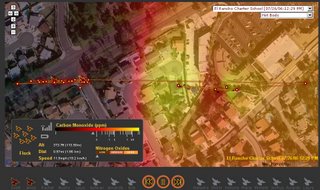 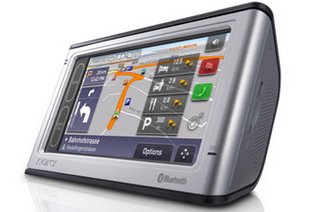 Position Plus covers for short losses of satellite reception, such as when travelling through an underpass or between tall buildings, by using acceleration and direction sensors to keep track.
Via Stuff

British Airways shows all its Destinations and Prices via Google Earth 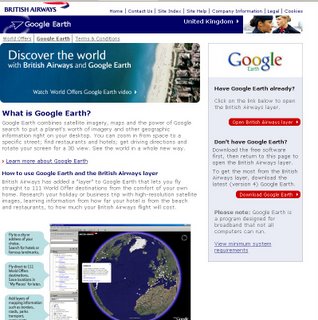 "British Airways has added a "layer" to Google Earth that lets you fly straight to 111 World Offer destinations from the comfort of your own home. Research your holiday or business trip with high-resolution satellite images, learning information from how far your hotel is from the beach and restaurants, to how much your British Airways flight will cost."

Maps International have updated the bespoke MapVu Range.
Enhancements are: 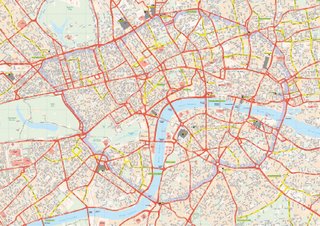 What makes this different to any other Mapping Product.

New MapVu Data on the Website is currently being updated.