Google are now allowing you to download the vector data (Kenya only so far) in either Keyhole Markup Language (KML) or in ESRI Shapefile format.

The idea of Google using users to map areas of the World where the likes of TeleAtlas Data is limited or non existent has been rewarding to both Google (gaining mapping content) and NOW non-commercial-non-profit entities. Screenshot of the Vector Data in ArcMap - Same data as above just different style applied.

Mapperz had a speedy look at this.

and loaded the shapefiles into a Geodatabase (topology can be cleaned and edited in ArcMap).

Created a quick Cartographic Representation and did a very quick style.

The Result is quite different to the Google Maps Style of Mapping (on purpose). But the underlining data is the same.
(no editing was done to the downloaded data - only shapefile to file geodatabase was done.)

Future: Does this step on the toes to projects like OSM? yes and no - can see both working.
Analysis -
There are many aspects of this vector data that can be applied - buffering, spatial searches and geocoding for starters... 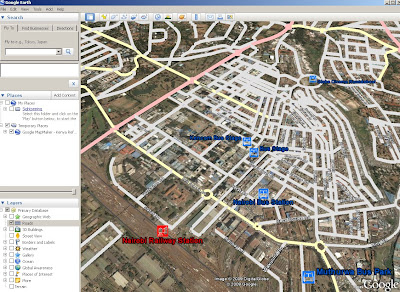 The Exported 'Styled' Data from ArcMap (MapDoc to KML export) in Google Earth
Note: There are better KML/KMZ exporters than the standard ArcMap one

The Data is available after accepting the terms here
https://services.google.com/fb/forms/mapmakerdatadownload/