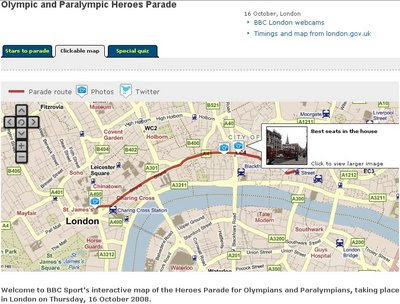 BBC has created a map showing the route of the parade using the Microsoft Virtual Earth API.
The line on the map marks the route the parade will take, from Mansion House to Trafalgar Square.

Ollie Williams created this map with the intention for people who cannot attend the parade and will be uploading images live from the parade so the map will have more content during today.

"If you're not going, you can use the map to follow instant photo and text updates from points along the route."

"It's clever stuff, and it allows us to tell the story of events in a complex, live, graphic environment for the first time."

A mobile phone camera with built in GPS and Flickr and ShoZu websites will be used.

More on how the map and content is going to be created and used here
http://www.bbc.co.uk/blogs/olympics/2008/10/mapping_the_olympic_parade.html