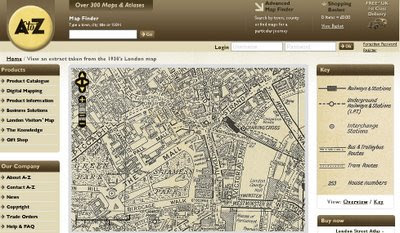 "Discover the streets of a bygone age with a nostalgic look back in time at this early edition of the famous London A-Z."

View an extract taken from the 1930's London map

"The original printing of this paperback street atlas before the Second World War was in black only; however, this facsimile reproduction has been printed in colours which simulate the current condition after its ageing over many years."

"Geographers' Map Company was founded in 1936 by Phyllis Pearsall MBE (1906-1996) who, encouraged by her father Alexander Gross, took on the ambitious task of publishing up-to-date street mapping of London. This Historical Edition is a facsimile reproduction of one of her first publications featuring the now renowned A to Z logo on the front cover."

hi nice blog got here as im trying to figure out how to get a map with a search bar (Trying to add a map with a google adsense searchbar to a new blog but having problems figuring out how to do it) onto a blog page, you have a great little search map right beside this post did you make that yourself or did you get it somewhere on google. if you dont mind visiting my blog and leaving a comment about it i would be most grateful.

Of course most of the streets are still the same! There are some fairly obvious changes along the river: eg. the Millennium Bridge and HMS Belfast are both absent. Other changes can be seen in changes in railway infrastructure - eg. the yards on the approaches to Marylebone. No doubt office blocks have also made some changes.

As for technology: an effective use of MapServer and OpenLayers, although this map excerpt is hardly taxing either package. OpenLayers is only being used for slippy/AJAX maps - the main multi-layered feature is not being used at all. Other historic maps (eg. a historic tube map) could be added, although that would be more for historical interest and I doubt A-Z publicity would benefit much!

John, I think you are looking for
http://www.google.com/coop/manage/cse/create/1?Get+Started=Customize+Your+Own+Search+Engine
This Wizard creates a Custom Search for your site:.

As for the Google Bar on a Map
http://econym.org.uk/gmap/baroptions.htm
(Credit to Mike Williams)