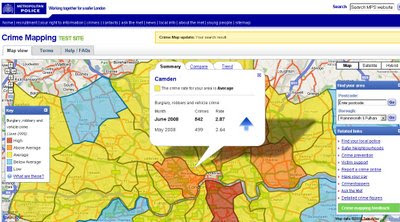 Polygons are generalised but the thematic map shows the crime rates across Greater London.

Areas of London are colour coded to show crime levels in user selected areas relative to other areas of London. Specifically, areas are colour coded according to how their crime rates compare to the average for London. This is done using standard deviations - a statistical measure used here to calculate how close to the London average an area´s crime rate is. The following ranges are used to describe this within the maps:
"The purpose of this site is to help show where crime is occurring at a local neighbourhood level.

It has been developed by the MPS in conjunction with the Metropolitan Police Authority and the Mayor of London.

This is a live test site (known technically within the industry as a 'beta'). It is intended to test the functionality of crime mapping, with a view to adding further features in the near future, based on your feedback.

Please note, that whilst every effort is made to record the details of crime and its location as accurately as possible, there are occasions when victims are unable to provide the actual location of a crime. In these instances, the site will not be able to display all the crime reported to the police."

I met someone from the Met Dept at ESRI ArcGIS Server training back in Spring - Is this an example of pulling data from AGS and displaying on Google Maps? (If so, how come they have 9.3 and I dont)

If not - how is this site built?