Mission accomplished - The Long Way Down (there is a Map)

"Long Way Down is the most recent motorbike adventure with Ewan McGregor and Charley Boorman. Leaving on 12 May 2007, they travelled through Europe, and then Africa – from Tunisia to South Africa, via countries such as Egypt, Ethiopia, Kenya, Tanzania and Namibia - a total of 15,000 miles. The team arrived in Cape Town, South Africa on 4 August 2007. It is a follow-up to the Long Way Round trip in 2004, where the pair rode their motorbikes from London to New York, travelling east across Europe, Russia and the United States. As on Long Way Round, they were accompanied by Executive Producers/Directors Russ Malkin and David Alexanian." 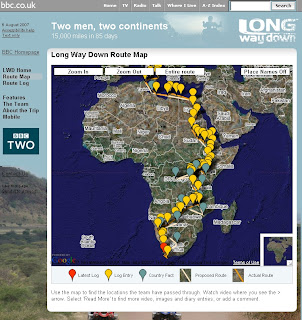 Glad to hear you're doing well and enjoying your time!