Yes the OpenStreetMap'ers have been on the ball and with on the ground surveys and have updated the Bridges (collapsed or to be demolished).
Now this sounds a cruel but in reality shows the raw power of 'crowdsourced' mapping. 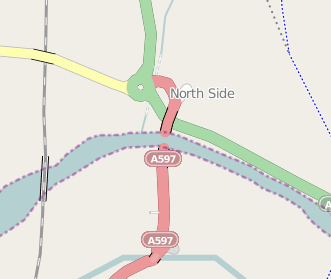 OpenStreetMap Updates [source] have come online within days of the bridge collapse.
Yes there was a fatality more here
http://en.wikipedia.org/wiki/2009_Cumbria_and_southwest_Scotland_floods

Now all we require is Flood Mapping Areas from Environment Agency (EA) overlay [available in April 2010?] on the map to show potential flooding on Ordnance Survey (OS) Maps.
Then the analysis of Met Office data [available in raw format in April 2010?]
Then the OFS [Open Flood Map] can provide real-time flood alerts and help communities likely to be affected.

Background on Bridges and Travel Distruption

Note - Ireland has also had huge problems with flooding over the past week.
http://www.breakingnews.ie/ireland/emergency-flood-fund-to-little-says-opposition-435667.html
And more rain forecast doesn't look good.

Hmm, yes wouldn't weather data feeds be great - but who's going to fund the development and infrastructure for this? What would you have dropped, given public spending is planned to decrease?

For events like these it is vital that the disaster recovery agencies have access to the data, we need to make sure that nothing else impedes that.

Also I'm not sure that a mash up of raw data is going to help anyone - the Flood Forecasting Centre is staffed by experts from the Met Office and the EA who need to carefully interpret the data to assess risk - don't we need to make sure that accurate information is disseminated?

That's not to say that data shouldn't be made available, but I don't think it's as straightforward as you seem to think.

you be surprised on the background knowledge of all...

There is no 'one place' this information can be found.
EA website needs major overhaul.
OS needs a download area [April 2010]
Met Office doing best with 'invent'
floodriskmap.gov.uk anyone?

There is one place emergency responders can get the data - and guaranteeing access to that 24/7 is the priority. Peoples lives and properties are at risk during a flood event.

What I'm saying is that you are proposing a new service that would require some development and infrastructure that would not impact on the Public Weather Service - it doesn't come out of thin air! I'm not saying that it's a bad idea, just saying I don't think the demand/political will is there to pay for it or drop something else to make the provision

Perhaps you are right with your concerns about funding, but to see the power of crowd-sourced disaster management we just need to look at Scipionus in the aftermath of hurricane Katrina. The value of such a service, when combined with realtime data would be immense; perhaps if the citizen had access to such data then the strain placed on the emergency services would be lessened.