"A unique experiment uncovering crime in a typical British city"

The BBC have chosen Oxford, England because it is as close as they could find to a typical British city. In terms of demographics, and particularly in terms of levels and types of crimes, it is typical of the national picture. 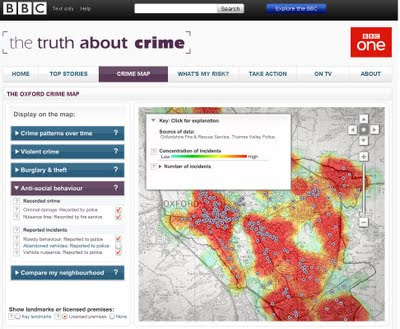 Why Heatmaps?
'heatmaps' are used to display the crime data, since these offer a clear way for users to see patterns of crime, without requiring users to have the expert knowledge of crime data analysts.

Want to create your own heatmap?
Try - http://www.heatmapapi.com/