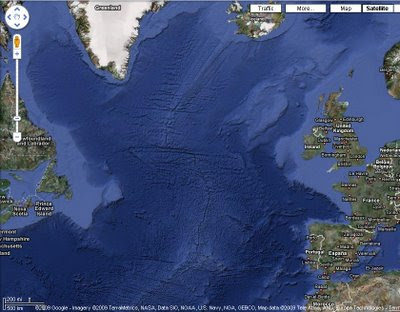 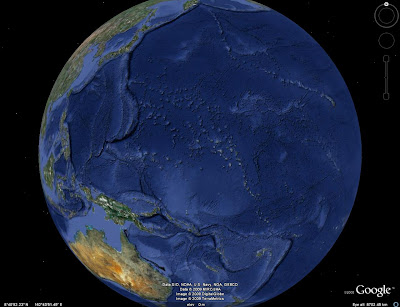 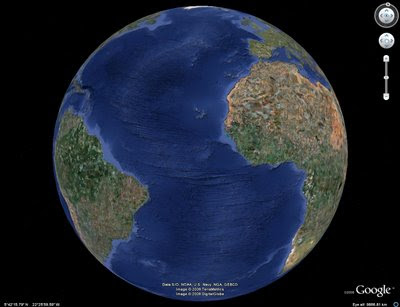 Bathymetry has now been made available in Google Earth - Looks good from along way out but when you zoom in it becomes a little less useful.

But when the terrain [3D] option is switched on it doesn't reflect the true depth of the oceans, a little disappointing. Maybe a future enhancement...

Here are their thoughts - for more detailed information and comments visit the blog sites.
"Hopefully they can vastly improve the edge matching, aka the coastline, then I wont mind."
Barry Hunter Nearby Blog 18/01/2009/01

"But what this layer also hints at is that the mooted and hoped-for true 3D ocean landscape is likely not arriving anytime soon to Google Earth. A true bathymetry DEM for the globe would have been a real feat, but instead we'll be looking at a 2D rendering of it for a while yet."
Stefan Green Ogle Earth 20/01/2009

"some island atolls which had low resolution data look less "visible" in the new imagery. Particularly noticeable are the Maldives, also St. Helens, Montagu Island, and many other islands now show "floor" instead of the islands"
Frank Taylor - Google Earth Blog 17/01/2009


If you don't have Google Earth [available for Mac & PC] you can download it for free from
http://earth.google.com/

It's been a little while since the last update to the software, so expect a new version in the near future.
Mapperz

I and my colleagues had been waiting and hoping for below-sea-level elevation in Google Earth for a long, log time. To us, this is exciting! NOAA's NGDC publishes most of the bathymetry that they've collected over the last 150 years, maybe now someone will translate it into KMZ. Somewhere, the UKHO has theirs as well from all over the world...