BBC 'Britain from Above' - Map

BBC Britain from Above Map 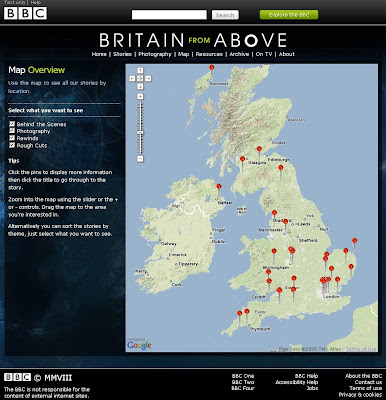 Andrew Marr takes to the skies exploring Britain from above.

An epic journey revealing the secrets, patterns and hidden rhythms of our lives from a striking new perspective.

Britain looks very different from the skies. From a bird's eye view of the nation, its workings, cities, landscapes and peoples are revealed and re-discovered in new and extraordinary ways.

Cutting edge technology allows you to see through cloud cover, navigate the landscape and witness familiar sights as never seen before.

[Extract from BBC Britain from Above]

The programme starts on Sunday August 10th at 9pm on BBC One and then switching over at 10pm on BBC Two. It will air for three weeks concluding on Sunday August 21.
[or view it after it has been broadcasted using the BBC iPlayer for 7 days]

UK Users can see some short clips from
http://www.bbc.co.uk/britainfromabove/stories/rewinds/edenproject.shtml

All the GPS visualisation animations were done by CGI house 422 South, based in Bristol. More samples of their CGI work are viewable at www.422south.com