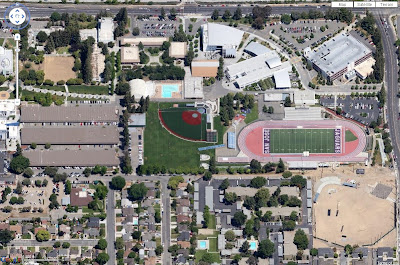 New Map Mode - Tilted Aerial Imagery comes to the Google Maps API.
(techies call it oblique aerial and its taken from aircraft from the side or front)
getmapping has a good set of examples
http://www2.getmapping.com/Services/Obliques


"Starting today [8th December 2009], developers will have access through the Google Maps API to high-resolution overhead imagery that is presented in a new aerial perspective. This is currently available in 2 spots in California: San Jose and San Diego. This new perspective gives users the ability to tilt their view of the world. In addition to seeing hotel rooftops like in our current "satellite" view, users can now see both the rooftop and sides of the hotel at an angle. In fact, users can rotate around all the sides of a hotel to get 4 different views from back to front"

"What's great about this new imagery is that all of your existing data and Google Maps services like driving directions can be displayed on your map with no extra work. This is a result of a lot of code and computing power that reprojects the imagery to make it easy to overlay data on the map given lat/lon locations like in any other Google Map type. The result is a great user experience together with easy display of data on the map"