Clean cut, easy to navigate, film suggester and maps what else is there... 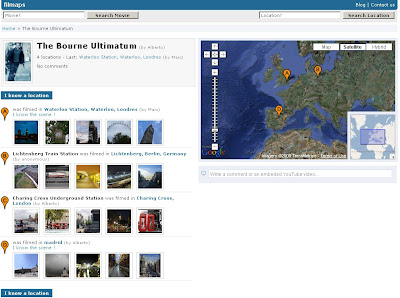 "We like films (movies and TV series) and we love travelling around the world, who doesn't?...Sometimes the charm of the places where the films have been filmed wakes up your adventure soul and you would like to discover even visit the exactly place where the scene took place. That's the filmaps aim, the possibility of locating that place!"

There is a lot of activities and tours related with film locations which are designed in order to visit some of them and
recreate the film action. Filmaps wants to help people in order to find that place.

A nice mashup with huge potential to link up with imdb, wiki or rotten tomatoes databases
example 'The Bourne Ultimatum'
http://www.imdb.com/title/tt0440963/
http://en.wikipedia.org/wiki/The_Bourne_Ultimatum_(film)
http://uk.rottentomatoes.com/m/bourne_ultimatum/

Then it's a question of keeping it up to date.

Fantastic blog! I keep a blog about geography and printable maps at http://printable-maps.blogspot.com

Have a look and let me know if you'd like to exchange links.