Where is the Railway Path? [Old Maps Better]

Where is the Railway Path? [Old Maps can be better sometimes]

Yes it a fact. Here is some proof.
UK Railway networks/passengers peaked in the 1940's
Then there was a decline in the number of the routes and services and therefore passenger numbers.
"desire for profitability led to a major reduction in the network during the mid-1960's"

So where is this leading, well as it happens Bill Chadwick has looked into using old Ordnance Survey Maps [via NPE] to show the original Railway Networks - these are happily out of crown copyright now.
Here is a Map where the network does not get represented with rail spec on new OS Maps. 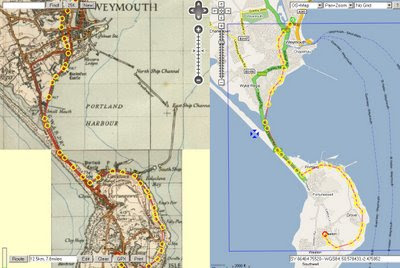 Both the Google Maps [Right and the New OS Map fail to show an original railway line going to Portland Bill]
The Old Map [shows the course of the railway in full spec]
Digitised to make it clearer.
Mapperz is not saying new maps are bad, just they only show a snapshot of our current time and not the full picture, aerial and satellite images can be used to this but to the general user it would be hard to tell whether this was an existing railway or not.

Note:The NPE tiles are served by Getmapping.com - there maybe limited time for these older maps to be displayed. Hope this is not the case.

View the Old Maps and New Maps
http://wheresthepath2.googlepages.com/wheresthepathNpe.htm
**Please look at the useage bar in the bottom left corner if going red then tile useage from the OS OpenSpace API will refuse to display after 30,000 tile impressions a day - OS please raise the limit!