Finally in a much more 'user friendly' format.... 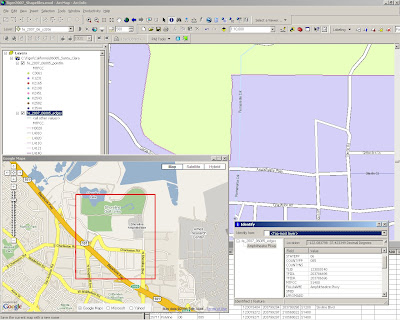 A very quick example of Tiger 2007 in ArcMap - No editing, labels direct from the downloaded files.
Very useable.

"The TIGER/Line Shapefiles are extracts containing selected geographic and cartographic information from the Census Bureau's MAF/TIGER® (Master Address File / Topologically Integrated Geographic Encoding and Referencing) database. The MAF/TIGER database was developed at the Census Bureau to support a variety of geographic programs and operations including functions such as mapping, geocoding, and geographic reference files that are used in decennial and economic censuses and sample survey programs. Spatial data for geographic features such as roads, railroads, rivers, and lakes, as well as legal and statistical geographic areas are included in the product. Other information about these features, such as the name, the type of feature, address ranges, and the geographic relationship to other features, also are inlcuded. The TIGER/Line Shapefiles are made available to the public and are typically used to provide the digital map base for a Geographic Information System or for mapping software.

The 2007 TIGER/Line Shapefiles contain current geographic areas (boundaries of governmental units as of January 1, 2007) and Census 2000 vintage geography. The shapefiles also contain some additional post January 1, 2007 feature updates reported in the Boundary and Annexation Survey (BAS). The 2007 TIGER/Line Shapefiles contain realigned street feature coordinates as a result of the MAF/TIGER Accuracy Improvement Project. The Census Bureau is providing a list of counties that have not been realigned via the MTAIP process."

The North American Datum of 1983 was used in the 48 contiguous states, the District of Columbia, Alaska, Hawaii, (only Oahu Island within Honolulu County, HI (15003)), Puerto Rico, the Virgin Islands of the United States, and the Pacific Island Areas. Even though a NAD83 PRJ file will accompany every TIGER/Line Shapefile, there are a few island areas in TIGER that have not gone through the NAD83 transformation process and are still in local astronomic datums. For detailed information regarding these exceptions please refer to the metadata that is included with each TIGER/Line Shapefile.

DIRECT TO THE DATA

Did you download a new MTFCC style file somewhere, or did you create your own? I am thinking of creating a new one using the old ESRI CFCC styles and just renaming what I can, but if someone has already done that then why reinvent the wheel.

We should thank you for giving such a wonderful blog. Your site
happens to be not only informative but also very imaginative too. We
find a limited number of experts who can think to write technical
articles that creatively. All of us are on the lookout for information
on something like this. I Myself have gone through several blogs to
build up on knowledge about this.We look forward to the next posts !!