"In 1996 the European Commission issued a Green Paper in which it was stated that an estimated 20% of the EU citizens were exposed to noise levels that scientists and health experts considered to be unacceptable, at which most people become annoyed, sleep is disturbed and health may be at risk." 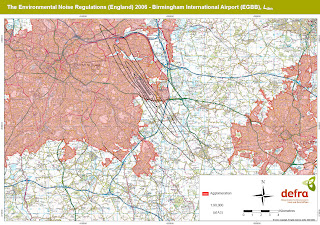 All available from
http://www.defra.gov.uk/environment/noise/ambient.htm#aviation
(1 to 4mb PDF's with Ordnance Survey 1:50,000 Rasters included, Arcview 3.2 was use - north arrow and scale bar giveaway there.)

Glossary to help understand the maps

Decibel (dB)
The decibel (dB) is a logarithmic unit of measurement that expresses the magnitude of a physical quantity relative to a specified or implied reference level. Its logarithmic nature allows very large or very small ratios to be represented by a convenient number. Being a ratio, it is a dimensionless unit. Decibels are used for a wide variety of measurements including acoustics, and for audible sound A-weighted decibels (dBA) are commonly used.

dB(A)
A unit of sound pressure level, adjusted in accordance with the A weighting scale, which takes into account the increased sensitivity of the human ear at some frequencies

Levening
The A-weighted average sound level over the 4 hour evening period of 1900 – 2300 hours.

Noise Contours
Lines showing the locations with the same noise exposure according to the key shown with the maps.

And when will they also be releasing the data as .kml file or gml file iso we can play with it properly :)

I have transcribed the 57dB contour to a google map I prepared for the proposed Heathrow expansion. The map is open and people are free to tweek it and add information to it as they see fit. The map is accessible from here: http://url.ie/7g5