Tabula Peutingeriana Map (one of the first find your nearest maps?)

Visitors walk on a carpet depicting the "Tabula Peutingeriana" as they look at original fragments of the ancient roadmap of the Roman Empire dating back to the late 12th or early 13th century in the national library in Vienna November 26, 2007

"The parchment scroll, nearly 7 metres (yards) long, could only be displayed briefly because too much light would damage it, before it was returned to storage at Austria's National Library, where it has been since 1738" 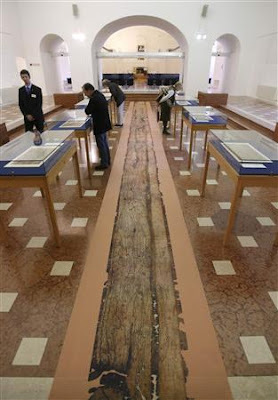 "It's a bit like when you look at a map of the Vienna underground system, it's not accurate but it gives you a good idea of how to get around" Andreas Fingernagel of the Austrian National Library