Recorded crime in England and Wales on Google Maps - find what crimes have been committed in their neighbourhoods.

The map shows crime mapped to "an anonymous point on or near the road where they occurred." NOTE: Individual addresses are not pinpointed on the map.

To search for crime in an area users can enter a postcode or an address. The map will then display the crimes committed in a radius of the submitted location. The maps include a pretty neat marker clustering system and the number of crimes are also broken down by category. 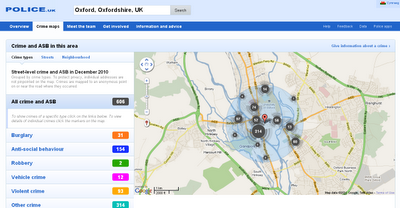 Crime Maps for England and Wales - to Street Level - Search by postcode, town name or street.

Built on the API - http://www.police.uk/api/docs/