Not a great topic be but a blunt reality...

"For an everyday activity, travelling by road is probably the riskiest thing many of us do on a regular basis." 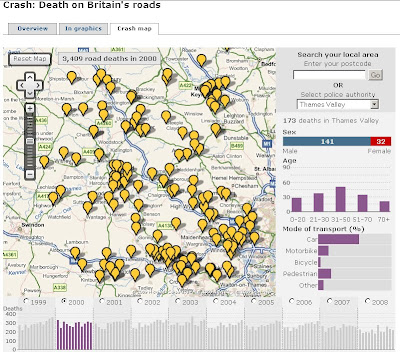 The map spans dates from 1999 to 2008 and highlights where deaths occured and what nature and how many deaths. Thames Valley (Police Authority) seem to have had a successful downward reduction in road deaths across the time period.
Main causes - Speeding, Mobile/Cell use and Drink Driving (alcohol)
Lots of Motorway deaths seem to be lorries (trucks) and passenger cars - the blind spot?

On average, some seven people are killed every day on the roads in Great Britain. Hundreds more are injured, many of them seriously, often with life changing consequences.

In 2008, 2,538 people died on Britain's roads, on average nearly seven every day. Using official data released by the Department of Transport, this map plots the location of every fatal road crash in Great Britain between 1999 and 2008, a total of 32,298 deaths.

Select a police authority or type in a postcode to discover where fatal road crashes occur. Click the yellow markers to get more detail. For 2008 we have included some links to stories – both BBC news and others – to convey some of the grim reality behind the statistics.