"The Los Angeles region is widely known for its extreme traffic, and a study released just this week by the Texas Transportation Institute reports that LA has the most significant congestion in the United States. It goes on to estimate that commuters in LA spent 485 million hours idling in traffic, wasting 367 million gallons of gas."
(hint: have a smaller engine or get on a bus) 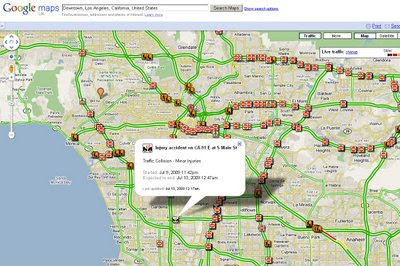 Go to Google Maps (in Los Angeles) and hit Traffic and you get real-time incidents mapped.
A click-able icons and informative data to help advise on an alternative route.

"As a part of Google Transit, Metro's itineraries will now appear as an alternative with the "Public Transit" link when a user searches for driving directions within their service area to remind commuters of the availability of public transit. Turning on the Traffic layer in Google Maps to get an idea of what congestion awaits may provide even more motivation to try take advantage of Metro!"
http://google-latlong.blogspot.com/2009/07/take-ride-with-la-metro-in-google.html
(and source)

How useful is this?
Well being real-time and accurate it seems to work extremely well. If only all cities made this data available then the amount of fuel consumption and wasted hours in traffic could be reduced.
Well done Google and the Los Angeles County Metropolitan Transportation Authority for making it available for the public.