CloudMade - A Preview the Future of Mapping

CloudMade - A Preview the Future of Mapping

Have faster maps - if you use Open Street Map - Please donate to help get whizzy fast servers.
http://donate.openstreetmap.org/
(invest your money here rather than a UK bank - your get a better return)

And there are thanks from the Open Street Map Team
"UPDATE: Thank you to everyone who has donated. Any additional contributions raised will be used to fund additional hardware on other under resourced OpenStreetMap servers." 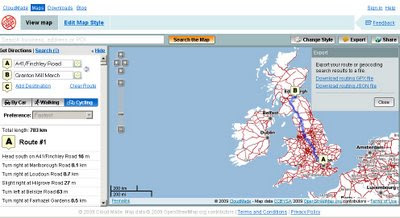 "On the evening of the 12th February, CloudMade invite you to preview the future of mapping application development. Our developer launch event will feature a keynote talk from CloudMade Founder Steve Coast, who will share his pioneering vision of mapping."

The evening will also feature presentations from a selection of CloudMade partners who will demonstrate never seen before web and mobile applications built using CloudMade's web services. You'll have the opportunity to talk one on one to the CloudMade team and to our partner developers to find out exactly how CloudMade can help you build better applications.

The London launch event will be held at the Holborn Bars, 138-142 Holborn, The City, London, EC1N 2NQ (view on map). There will be a drinks reception and networking from 6 - 6.30pm followed by presentations and the launch event. The event will conclude around 8.30pm, with some time for additional networking.

"CloudMade's web services are going to change the way your users experience geo apps. We've been working on a set of Tools and APIs to give you access to verified OpenStreetMap data on the platform you choose in the formats you want."

Two developer events in San Francisco and London will introduce you to CloudMade's unique services. If you're a developer building web, mobile or desktop mapping applications, these are the events for you.

Did you make it along to the cloudmade event? There's some post-event information and videos of the presentations on the cloudmade blog for anyone who missed it.