What is Reverse Geocoding? "finding an associated textual location such as a street address, from geographic coordinates."
source:wiki:geocoding 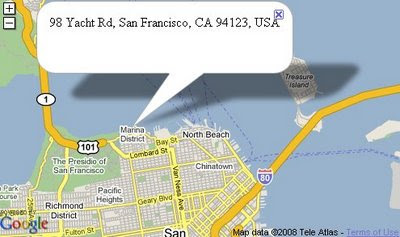 Clicking the map sends the latitude and longitude to the 'Google Geocoder Servers' the nearest address is returned. (click the image above to view the new official example)

Finally after many months of asking Google Map API Team have released the Google Reverse Geocoder :)

There is also a HTTP Server Reverse Geocoder - it works like this
send request:
http://maps.google.com/maps/geo?output=xml&oe=utf-8&ll=37,-122&key=asdad
Reply is: 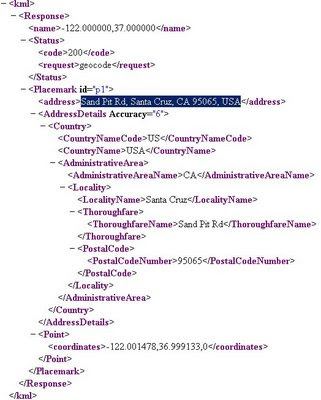 IF this spreadsheet has a 'Yes' in the Geocoding column then that country is supported with Reverse Geocoding as well.


"Note: that GClientGeocoder should be used for any user-entered reverse
geocodes, due to the way our [Google] IP limit system works. The HTTP service
should be used for tasks like reverse geocoding points in a database."

Well done to the Google Maps API Team on working on this and providing some good feedback.

Problem is that the license does not really allow you to use this information!
The service under geonames.org is for free I guess!