Satbeams generates transparent polygons on the fly for each selected satellite 'beam'. 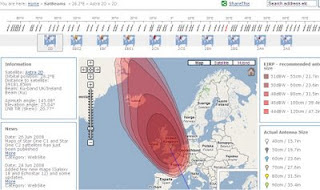 
"The site allows to view the Satellite Coverage maps for most of the satellites all over the globe in Google Maps format. At the same time it is possible to place markers on the map stating which frequencies/channels one can receive at the specific location and view what others can receive from the selected satellite in different places of the world."
Alexander -Satellite Coverage Maps


Registered Users have more
As a result, the more people place markers with their reports the more accurate information is available to Sat-TV users all over the globe.

Mapperz notes there was a lot of work done on the website - it took
several months of several people to make the website.
More features to come in a 2-3 months from now. So stay tuned.
Congratulations to the team for creating a useful mapping tool.