The Worst (Data) Map Ever?

The Worst (Data) Map? (There is a good example here too)
*A slight change in direction for this blog but this is to prove a point!

A bad subject matter to map to begin with...agreed

But the Map data is crap.
Richmond, London not Richmond Near Darlington. 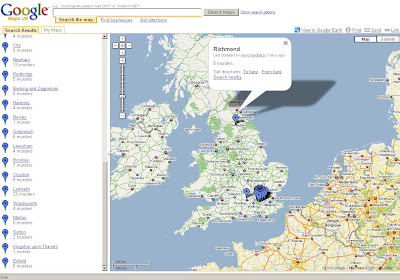 Hillsborough, London, not Near Reading..

A simple QA of the data would point that out.

"In one of the most detailed breakdowns recorded of murders in the UK, figures revealed a sharp rise in the number of teenagers being killed, that there were 70 stabbed to death and 30 shootings, and that the peak time for murder was on Sundays between 12-4am."
Source: Telegraph

Comments about this map - so positive!

just reading the comments of the map
"This map is pathetic. It's dumb to have markers for boroughs rather than murders. You even obscure the basic information about murder count -- we have to click through links and scroll down to see the full list of murder counts, whereas you could have shown the same information more cleanly in a plain text table. You might order it alphabetically (so I can see quickly where my borough falls), or my count (so I can see quickly which boroughs are best and worst). You should do another map with one pin per murder. "

"This map is virtually useless. The best web map of this sort is published by the Los Angeles Times. Each symbol on it represents a homicide, and users can select characteristics such as age, race, or sex, and then map them separately. Moreover, every symbol is connected to a description of the homicide it represents.The map is updated regularly and from it one can follow the changes in homicide incidence from week to week."

Okay what is good then Mapperz? (since you seem all so clever) 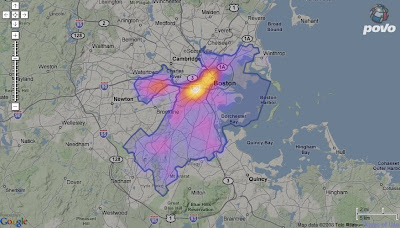 *Note its using the same google map api to create both. It's just the way you show your data and present it.
More like this one please!

Great example. Before clicking on the map on the article page to enlarge it, I assumed every pin was a murder and therefore thought the murders were evenly distributed across the city, and not concentrated at all!

I'd suggest that if they don't have access to heat map creation technology (GeoIQ is down), they might use something like MapIconMaker to atleast indicate intensity with the icons. And, yes, borders would be a big help.

They are not using the same API, one is using the much simpler My Maps service that google provide, the other seems to be overlaying a custom image over the public API, a much harder task.

However, that is no excuse to get Richmond at the wrong end of the country, whichever result Google decides to return first...