Here is a Video showing the functionality of MapJack in Thailand.

Top Tip
Click and hold the radar beam near the 'Jack' (Icon) and panorama picture shows what Jack can currently see. The 'radar' beam coming out from under Jack is an indication
of what direction Jack is looking, and how wide he can see.

Privacy and legal issues.
MapJack panoramas are all captured on public property with the intention to show a city and it's features. If you feel that a picture contains unproper exposure use the
Feedback Form. 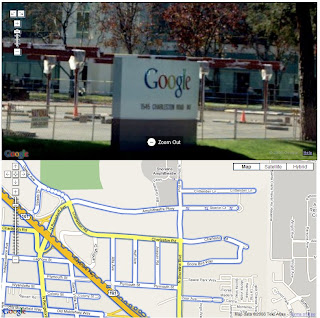 We are now watching you Google.

This is NOT official so not supported (as yet). Mike Williams has a few *temporary links* in which users can view this.
See Google Maps API post 'Syntax changes for v2.103 - preliminary report'
Shows todays progress.
Mapperz version
http://mapperz.googlepages.com/GMAP_Streetview.html
(credit to Mike Williams)
Well who wins?
In this case, it's unfair to say either is a clear winner, Mapperz prefers MapJack's 'User Interface' has more functions more interaction on the surroundings, while the might of Google tries to map and photograph every square inch of every US City (and told not to in places) they do have more coverage.
But MapJack wins on being the first location outside of the US (Chiang Mia, Thailand). Well done.
No UK yet but maybe in the near future (?)
So a draw? Well I think there is a learning curve for both - seeing both developments is innvotation in itself, hopefully they can learn from each others methods and
visualisation. Comments welcome on this.

Future of Streetview.
Privacy and security is the big issue. Some Countries even neighbours of the US are aware of there own privacy laws (Canada) Coverage need to be complied with.
This will be a big presence in the coming months and years, rumours and sightings of cars with 360 degree cameras on them are abundant. Even London

Well spotted on the Streetview.

I've thrown together a quick example where the streetview actually appears in the infowindow (again working on a Mike Williams example).

I'm now going to try and work out how to move the map when you move in the streetview.

Good analysis and comparison. Check out my reviews at my Street View blog. This is my post on why Street View is the best. I hope you like it!