Update 2
London could be next to see severe flooding

Floods Could Hit London Next

"More than an inch of rain is set to drench the city and this rain, combined with the water that has already poured into the Thames, could burst the river's banks in southwest London.

A flood warning is already in force in Staines and Shepperton, and hundreds of homes could be flooded in the next 24 hours."

Update the BBC has created a Map of the Flooding 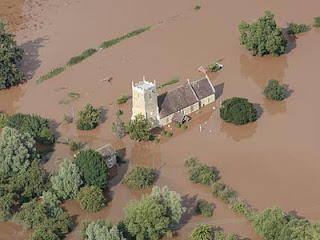 Okay to help users find pictures for the UK Flooding, Mapperz compiles the most useful links...
(this site has been hit hard for 'UK Flood' Maps)

Environment Agency (but not live data)

If your wanting maps of the floods, your out of luck, currently there are no public out of copyright maps available online that shows live information.