WiFi Map London Underground
"Transport for London (TfL) said people at King's Cross and Warren Street Tube stations will now be able to pick up the internet at ticket offices, escalators and platforms.

On Friday, Oxford Circus and Green Park Tube stations will go live, followed by Victoria and Euston on Saturday.
By the end of July 2012, 80 stations will have wi-fi access, with 120 expected by the end of the year.

Virgin Media will run the service which will become a pay-as-you-go offering after the Olympic and Paralympic Games.
Virgin Media's mobile and broadband customers will be offered continued access as part of their subscriptions."
BBC News

"Free service for passengers
With the eyes of the world on London this summer, Virgin Media's next generation WiFi service will be made available to all Tube passengers for free throughout the summer." 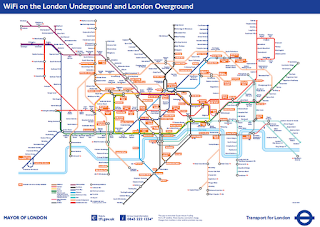 The Map [PDF] (a web map/app would be better!)
http://www.tfl.gov.uk/assets/downloads/corporate/wifi-stations-map.pdf

I'm wondering how or if various WiFi location services will map the positions of these base stations. It would be useful to use "Find My iPhone" or friend tracking on the tube, but at the moment these base station MACs are not in the location database.