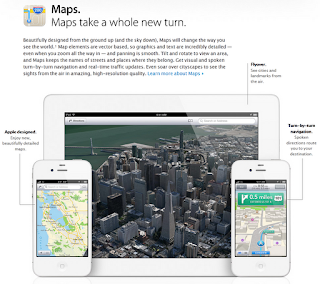 The main data source is TomTom owning the TeleAtlas Datasets
With other data-sources attributed here http://gspsa21.ls.apple.com/html/attribution.html

* Flyover and turn-by-turn navigation will be available only on iPhone 4S and iPad 2 or later. Cellular data charges may apply.

Would be good to see a web version rather than having to own a Apple device, do no expect an Android version anytime..