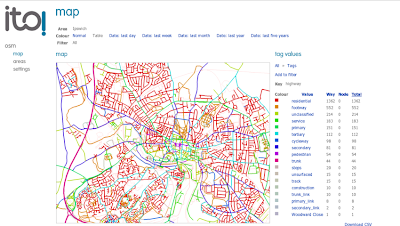 Surrey Heath Borough Council and ITO World are proud to announce the ﬁrst release of high resolution aerial photography, for all of Surrey, UK, to OpenStreetMap under an open licence that allows reuse.

The idea came to James Rutter, GIS Manager for Surrey Heath,
“we created most of the OpenStreetMap data for Surrey Heath, and it struck me that if we had high resolution aerial imagery then many more people would contribute.”

The project also has the ﬁnancial backing of nine other Surrey districts: Epsom and Ewell,Elmbridge, Guilford, Mole Valley, Runnymede, Spelthorne, Tandridge and Woking. All of
whom will beneﬁt from processed aerial imagery tiles that can be used internally, and the imagery will also be available to OpenStreetMap users so they can contribute to a better
map of Surrey.

There are multiple beneﬁts to be gained by Local Authorities working with OpenStreetMap,
such as a more democratically made map with instant updates. James Rutter said, “we
wanted to start mapping details that were relevant to our local communities, not just what data providers feel is worth mapping. We can edit OpenStreetMap and see the updates
almost instantly, the Ordnance Survey raster products take months for new releases. By doing this we are also making a high quality map base available for all communities in Surrey, with data that we have checked for accuracy.”

ITO World are providing services to allow authorities to monitor and review the accuracy of
contributions to OpenStreetMap for their local area. Christopher Osborne of ITO, says
“OSM Mapper has thousands of users globally, and a growing number of Local Authorities
are using it to engage with the OpenStreetMap project. We provide OpenStreetMap tiles
for websites, but now we are being asked how to crowdsource improvements to data, such as changes to roads and bus stops.” OSM Mapper is a free online product, developed with the support of Ideas In Transit, a ﬁve year research project funded by the UK Government.

High quality aerial imagery has been proven to be an extremely effective resource when creating detailed mapping. After the Haiti earthquake, satellite photography was released under an open licence by GeoEye and DigitalGlobe, which resulted in a detailed map of Haiti within days. ITO World visualised the story of ʻOpenStreetMap: Project Haitiʼ, for Sir Tim Berners-Leeʼs talk at this yearʼs TED conference. The visualisation provides a vivid story of how thousands of volunteers from the OSM community were able to create the most comprehensive map of Haiti, using the imagery.

Peter Miller of ITO World, says “the Government's commitment to opening up ofﬁcial data and the imminent release of various Ordnance Survey datasets, under an open license is a very signiﬁcant development. We are conﬁdent this will to lead to considerable innovation to the beneﬁt of the UK economy and its citizens.”

so this is a press release?