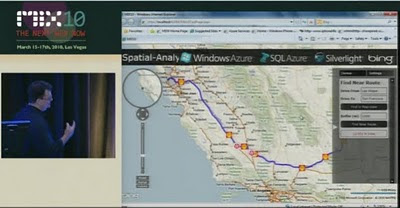 
Last Wednesday (March 17th), Dave Robinson of the SQL Azure Team announced upcoming support for spatial data in SQL Azure. You can view the announcement at the MIX Conference in the video of Dave’s presentation, Building Web Applications with Microsoft SQL Azure (go to 18:40 on the timeline for the start of the spatial data portion of his talk). 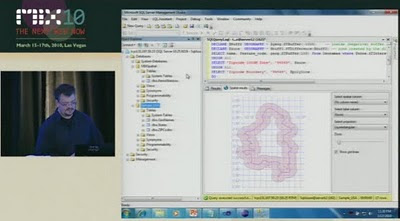 Spatial buffering a polyline - but across the web (not local database) - Windows SQL Azure will have spatial capabilities - to be released April 2010.

"SQL Azure provides a highly available and scalable relational database engine in the cloud. In this demo-intensive and interactive session, learn how to quickly build web applications with SQL Azure Databases and familiar web technologies. We demonstrate how you can quickly provision, build and populate a new SQL Azure database directly from your web browser. Also, see firsthand several new enhancements we are adding to SQL Azure based on the feedback we’ve received from the community since launching the service earlier this year."

This uses the same technology as Microsoft SQL 2008 Server
basically it supports latitude and longitude.

A "Flat Earth" (GEOMETRY or planar) data type represents geospatial data which has been projected from its native, spherical, coordinate system into a plane.
A "Round Earth" data type (GEOGRAPHY) uses an ellipsoidal model in which the Earth is defined as a single continuous entity.