From the Free Our Data Blog:

A new No.10 petition: FREE the PostZon and help innovate the UK Geo-spatial industry

Mark Goodge added this as a comment to the data.gov.uk post, but it seems worth making more visible. So here it is:

This is not asking for Full Postcode (PAF) data but This is about Ordnance Survey's data, not Royal Mail's -- so it won't affect PAF, but it will affect postcode coordinate data.

"Postzon™ data allows you to link geographic and administrative data from government bodies, such as local authorities and the NHS, for all known Postcodes in the UK. Use it to help plan routes, calculate distances between Postcodes, allocate sales force areas, distribute resources or locate facilities."

Without this, UK mapping innovation will be quashed. 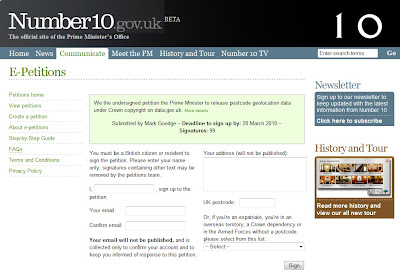 “While the launch of data.gov.uk is a big step in the right direction, the government’s response to the petition inspired by the forced closure of ernestmarples.com has been pathetic. As a consequence, I’ve created a new petition which seeks to focus more tightly on the Postzon data (the data use by ernestmarples in their API)." This can be found at http://petitions.number10.gov.uk/geopostcode/

Help free the data that was paid for by the public (UK tax payer)...