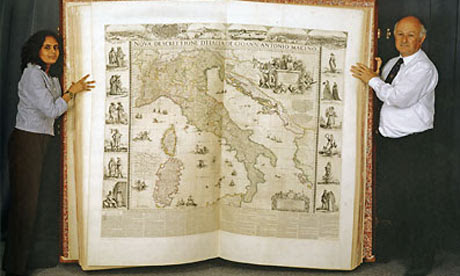 350 Years old, the Klencke is still the largest Atlas in the world on display in London soon at the British Library. dimenions 1.75 metres (5ft) tall and 1.9 metres (6ft) wide

"It takes six people to lift it and has been recorded as the largest book in the world, yet the splendid Klencke Atlas, presented to Charles II on his restoration and now 350 years old, has never been publicly displayed with its pages open. That glaring omission is to be rectified, it was announced by the British Library today, when it will be displayed as one of the stars of its big summer exhibition about maps.

The summer show will feature about 100 maps, considered some of the greatest in the world, with three-quarters of them going on display for the first time."

The Museum is free to all visitors and is open daily
10.00–17.30
Magnificent maps: Power, Propaganda and Art is at the British Library from 30 April to 19 September.