After months of debate. The final boundaries have been confirmed of what is inside England's newest National Park. 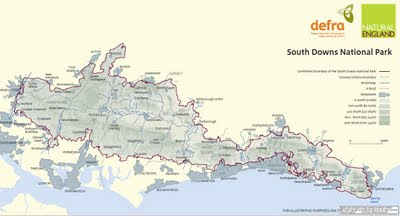 "Following a period of public consultation the Countryside Agency (as predecessor body to Natural England) made a National Park Designation Order in December 2002 detailing the area that it believed should be included within a South Downs National Park. A Variation Order was subsequently made in 2004 so as to include additional land. The proposed boundary was considered at a public local inquiry (in two phases) (and a later public hearing to consider some additional areas). Following consideration of the Inspector’s reports, Hilary Benn, Secretary of State decided that there was an area which met the designation criteria under the National Parks and Access to the Countryside Act 1949 and that the principle of a National Park for this area had been established."

The Secretary of State decided to confirm the Designation Order and the Variation Order boundary subject to a number of modifications, as set out in his decision letters of 31st March 2009 (PDF 181KB) and 12th November 2009 (PDF 41 KB).

Details of the inquiry and hearing can be found on the Planning Inspectorate website.

A more detailed map can be found on Natural England’s website.

What does designation mean?

Designation as a National Park is a formal recognition of the South Down’s special qualities in terms of natural beauty and opportunities for open-air recreation. It means that:

National Parks, along with Areas of Outstanding Natural Beauty, are considered to be the nation’s finest landscapes. They form part of a worldwide network of protected landscapes established by the IUCN (International Union for the Conservation of Nature/World Conservation Union).

The formal designation of the South Downs National Park will be on 31 March 2010.