OpenStreetMap users are getting a brand new online 'cartographic' editor in the form of Potlatch TWO (2.0)
Potlatch 2 is a complete rewrite.

1.New feature – friendly tagging system Potlatch 2 has a friendly, intuitive tagging system. The mapper can use graphical menus, dedicated fields, and icons to get the tagging just right – without the need to remember tag names and values.

Graphical Presets - no need to lookup or remember tags

Potlach 2 has a friendly, intuitive tagging system. The mapper can use graphical menus, dedicated fields, and icons to get the tagging just right – without the need to remember tag names and values.

2.New feature – 'What You See Is What You Get' (WYSIWYG) rendering Potlatch 2 has an all-new rendering engine far in advance of the current one. 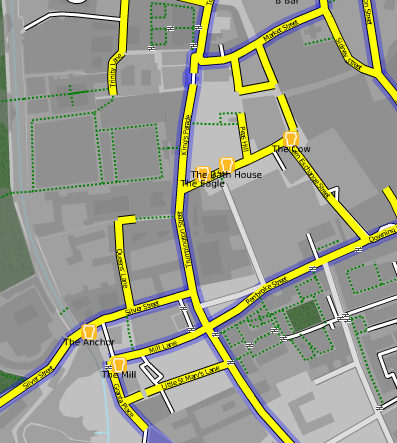 source:http://www.opengeodata.org/2009/11/30/introducing-a-new-osm-editor-potlatch-2/
With road names, patterned fills, rotated icons, and much more,form a Cartographic editing experience can be like working live on the familiar Mapnik rendering, the cyclemap, Osmarender, or anything you like -making it much more approachable for the beginner.Thumbs ups for this!


Just like the tagging, the rendering is easy to customise. It uses a special form of CSS, called MapCSS, which lets you create wonderful-looking maps with just a few lines of text. The tagging and rendering together make Potlatch 2 ideal for ‘vertical’ mapping applications, such as a cycle-specific editor or a building/addressing editor. Stylesheets aren’t just about making the map look pretty: you can create stylesheets to help your mapping, such as one that highlights roads without names.
So if your only interested in Footpaths then only show footpaths

Because this integrates fully with MapCSS stylesheets, you can choose to temporarily hide background data, or show (say) only footpaths… whatever you like.

So Potlatch 2 will have an accompanying ‘OSM Guide’, explaining the basics with friendly, illustrated text. It will be concise, focused and clear.

4.New feature – vector background layer Mappers are working more and more with imports. But the approach until now has been to import data directly into the map – and many people have pointed out the problems this can lead to.Highly requested

You can load OSM-formatted data from servers or files, and work on bringing it into the map the way you want, at your own pace.
Fully rewritten in ActionScript 3 Potlatch 2 is written in ActionScript 3, a Java-like language with an open source compiler and full docs available online. The Potlatch 2 source comes with instructions on getting started and is, of course, permissively licensed under the WTFPL.
Potlatch 2 thus far has been written by Dave Stubbs and Richard Fairhurst (Great Work). But we would love to see more people hacking on the source. There’s a potlatch-dev mailing list especially for this.

New Existing Features likely to be coming:
Some other features, like Yahoo and tiled backgrounds, are finished but not currently exposed through the editor: they’ll be along shortly. Others, such as GPS track support, the Beginners’ Guide and the vector background layer are not coded yet but are intended for the initial release.Load Import Shapefile? Export Shapefile options?? Would be good. [Hint]

Potlatch 1 has some three years of development behind it, of course, and much of this feature set has not yet been ported to Potlatch 2. There’ll be countless little UI tweaks (no keyboard shortcuts yet, for example!); and as you’d expect for an in-development version, performance can sometimes be sluggish and there’s a lot of optimisations we’d like to do.
But with work progressing so fast, this seemed a great time to talk about it. Both the tagging system and the renderer are enormously flexible and we’d like to see people hacking on them as soon as possible.
Live Version at:http://www.geowiki.com/potlatch2/
Renderer alone at:http://www.geowiki.com/halcyon/

Should you want to try a particular area, just put the lat and lon in the URL like this: