Lots of noise about where UK Broadband exists and does not exist - which is more important? 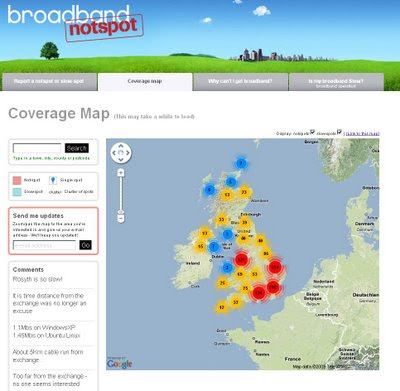 The UK Broadband Notspots (slow broadband or no broadband)
http://www.broadband-notspot.org.uk/coverage-map.html

"The broadband comparison site SamKnows.com composed a connection map which shows graded postcode areas with a connection speed according to their distance from the UK's 5,500 telephone exchanges. Any more than 4km from an exchange and the speed drops below 2Mbps - but that's the case for 50% of homes in Basingstoke and about 25% of homes in Hampshire. Around 1% of UK homes can't get any broadband connection.

SamKnows co-founder Alex Salter said decent broadband has economic implications for both consumers and businesses. "In some cases people aren't able to shop online, aren't able to view certain websites or use social media applications such as Facebook and Twitter and they can't watch the BBC's iPlayer.

"It prevents flexible working. If the problem is fixed it means a lot more people could work from home which offers a very real way to improve society."

source: Jemima Kiss - Broadband Britain: Can you get 2Mbps? The Guardian