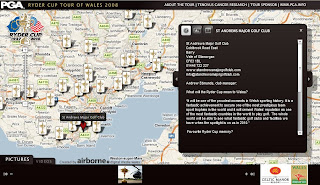 All golf courses and airports have been mapped in Adobe Flex for the PGA Golf Tour of Wales 2008.

"This application was built using Adobe Flex, an open source framework
for building rich Internet applications that get delivered via the
Flash Player or to desktops via Adobe AIR."

"One hundred golf clubs, one Ryder Cup. The Ryder Cup is taken on a tour of Welsh golf clubs by helicopter as a prelude to the 2010 Ryder Cup to be held at the Celtic Manor Resort."

Maps are based on the Microsoft Virtual Earth Platform (but with a google zoom bar).
Map available at
http://www.pgarydercuptour.com/Map.swf
(requires flash)

I just wanted to let you know about some great Golf Destinations at "Linksworldgolf.com". Use the world map to help guide you to your dream golf vacation destination. All vacations are fully customizable to suit every golfers idea of the perfect golf vacation.