"This API lets Flex developers embed Google Maps in Flash applications. Similar to the JavaScript version, this ActionScript API provides a number of utilities for manipulating and adding content to maps through a variety of services, enabling you to embed robust, interactive maps applications on your website." 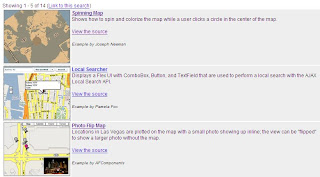 The demo gallery has several examples and what can be achieved by using the New Flash Version of Google Maps API for Flash.
The Spinning Map looks like a good potential starting point (was this inspired by Flash Earth?)

For Map Savvy Developers out there will already now that Yahoo has had a Flash based API for almost over two years now is on Version 3.5.2 beta. http://developer.yahoo.com/maps/flash/asGettingStarted.html

So the question is why now?
The Javascript version is still useful on its own and is constantly being updated and supported, but the Flash version can expand on what Google Maps has now and can extend the functionality
"Smoothness and speed are a big part of it. We've [Google] designed it so that Flash graphics can be used for each tile layer, marker and info window - opening up possibilities like dynamic shading, shadowing, animation, and video. When the user zooms the map, magnification changes happen smoothly and place names fade in."

Note some developers do not like flash and will avoid it if they can, but flash today has evolved to become a very useful tool to visualize information, displaying this data on maps can greatly enhance and explain complex situations.

More information and Official Source:
http://googlemapsapi.blogspot.com/2008/05/introducing-google-maps
-api-for-flash.html
(contains flash map/video and funky jazz sounds)
Thanks to Rob at Map Channels for pointing the new API out.

So look out for a Google Map Flash API vs Yahoo! Maps Flash API soon.