Google have just released Google Sky (Web Version) - Works in the same way as Google Maps does, but you now look up from the Earth to view the Sky at Night. 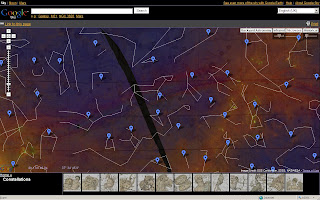 Google Sky Web Version (English UK)
Date Collected from:
Digital Sky Survey
Digitized Sky Survey
Hubble Space Telescope.
"Select the thumbnail images at the bottom of the display to bring up the planets, the constellations, highlights from the Hubble Space Telescope, famous stars, galaxies and nebulae, views of the universe in the x-ray, ultraviolet and infrared"

Other items available through Google Sky:

Backyard Astronomy - Highlights the stars, galaxies and nebulae that can be seen with a pair of binoculars or a small telescope. These placemarks tell you about the celestial objects as well as providing links to sites such as Google Scholar where more detailed information can be found
Infrared - An infrared view of the sky from the Infrared Astronomical Satellite (IRAS). Change the transparency of this layer by moving the slide bar to blend the optical and infrared.

Microwave - A view of the microwave sky from NASA's Wilkinson Microwave Anisotropy Probe (WMAP), which shows the universe as it was 380,000 years after the big bang.