Track your Pizza from oven to door.
(when tracking becomes is a serious business!)

Domino's Pizza Tracker™ are permitting people to check the progress of their order to the nearest 40 seconds. By using their telephone number, customers can see the name of the person who took their order. They can see at the same time at which the pizza goes into the oven and the points at which it is removed, boxed, bagged and put onto a delivery bike\vehicle. 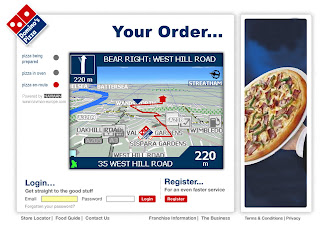 Domino's said the initiative followed a study of the emotions involved in awaiting a pizza which revealed that the "high" at the point of ordering was followed by a trough of anxiety.

"People have told us that anxiety sets in. They don't know if we've got their order, if we'll get it right, if it will arrive on time," said spokesman Tim McIntyre. "The tracker takes out the mystery involved."
http://www.guardian.co.uk/business/2008/jan/31/fooddrinks

With the new system, after an order is placed, the customer can go to dominos.com, click on the Pizza Tracker icon and follow the progress of the order. The site confirms that the order has been received, when the pizza is in the oven, when it's been boxed and when it's left the store.
http://www.usatoday.com/money/industries/food/
2008-01-29-pizza-tracker_N.htm

Bet your hungry too, now...

I've just emailed the Chief Exec demandeing that my Domino's is the first to trial it in the UK!

The IT Director just replied to say thay it is in its very early stages - but that we will be used as a test site. Will keep you informed