Quick update:
clickable circle with topology
creating your own circle on the fly with the inside/outside topology result.

Mapperz stumbled across this on the Mike Williams Website 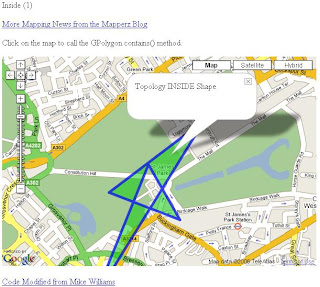 There can be many terms of this topology. A very simple example is a Point Feature has to be either Inside(1) or Outside (0) a Polygon Feature(s).

To view this in Action modified slightly from Mikes code.

Why the fuss?
Using this type of analysis in google maps api can be applied and bringing the google mapping api into a very simple GIS.

In this Markers (or Icons) can be selected and stored as a collection of arrays.

This could be 'select ice cream vans (points) with the county of somerset (polygon) only.'
or
'select available houses to rent in the Royal Borough of Richmond-upon-Thames'

Topology can be very powerful and very complex - this post only caters in the most primitive format of Topology.

How do your reach a circle? Trough approximation with a polygon or do you use another yet undocummented API?

1. Click the map to define a center
2. Click again at radius distance.
3. Move the mouse in and out of the circle.

Image will posted soon on the Mapperz Blog.